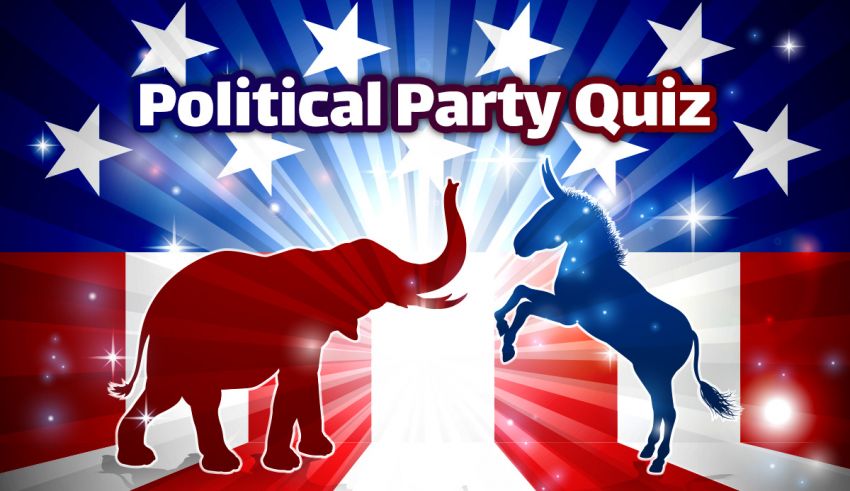 What political party are you? Statistically, over 135 million Americans are politically independent, supporting neither party. But what about you? Take the quiz to find out.

It’s a 20-question test to analyze your political identification through your views on social matters.

No right or wrong answers are there in the test. So, unlike a US president’s quiz, you should pick the options that align with your political beliefs.

A political typology quiz is the most accurate way to guess one’s party.

But based on statistics, there is a 97% chance you are either a Democrat, Republican, or Independent (also known as non-affiliated).

3 Factors That Determine Your Political Party

According to USHistory.org, family, gender, religion, race, ethnicity, and region shape your political identification. But you could put all of them in three broader categories: beliefs, needs, and deeds.

The word “politics” is a synonym for “beliefs.” So, no doubt, ideologies stick people together in political groups. You will likely align with parties that promote your values or at least respect them.

Political expectations can contribute to your choosing a specific party.

The working class, for example, often leans towards the Democratic party since the platform acknowledges their needs. However, higher-earning Americans ($75,000 to $99,999) are more likely to register with the Republican party.

Specific actions and decisions, such as gun ownership, can affect or determine one’s political party.

Why You Need a Political Party Quiz

The U.S. has over 420 political parties. So, understandably, it’s challenging to pick one representing your beliefs. But a genuine quiz could help with that.

You may need a political party identifier for two reasons: 1) Voting registration requirements and 2) Benefitting from your political right.

More on this below.

According to the U.S. Government, registering with a political party is not obligatory during an open primary or caucus. But some U.S. states mandate it during closed primary elections.

When filling out the voter registration form, you are specifically notified: “If you choose “No Party/None,” you may not be able to vote for some parties’ candidates at a primary election for U.S. President or a party’s central committee.

In his essay on independent voters, Steffen Schmidt, the Lucken Endowed Professor of Political Science at Iowa State University, writes, “When voters choose to be “independent,” they forfeit their chance to pre-select who their ultimate choice for all offices will be in November when the general election takes place.”

So, it makes sense to ask yourself, “Am I a Republican or Democrat or Independent?” because the answer clarifies how you will make the most of your political rights.

Tips on Choosing the Right Party

The following are four tips by EasyVoter.org that could help you select the right party.

Each U.S. political party endorses a specific view on social matters. When it comes to abortion, for example, Republicans are pro-life, meaning they don’t support abortion laws. Democrats, on the other hand, believe in Roe v. Wade.

U.S. political parties’ manifestos often contain a section explaining the group’s main concerns—or goals. Checking it out could give you an idea of what political party you want to be a member of.

With Democrats, for example, top priorities are expanding jobs through economic reinvestment, improving access to affordable health care, and ending wars in Iraq and Afghanistan.

Compare them to that of the Republican party: Promoting an economy that creates new jobs, reforming education and pension systems, and protecting taxpayers.

A quick way to answer questions like “What political party am I?” is by reviewing the parties’ platforms. The Democratic party, for example, publishes a new platform every four years, explaining its goals and plans.

You can always change your voter registration, updating your political party affiliation. So, although you need to pick your party consciously, you don’t have to worry about the consequences—because there’s always a legal way out.

The debates are often between Democrats and Republicans. But the U.S. has many more political parties: Reform, Libertarian, and Green come to mind.

To finetune the political party quiz results, we cover the main groups—and their ideologies. So, compared to other alternatives, you are more likely to discover the best political party for your views as opposed to getting a simple Democrat or Republican label.

5 Major US Political Parties You Should Know

You can’t make up your mind without knowing all the main parties in the U.S. Your options are broader than Democrats and Republicans—although you might have to choose one of their presidential candidates.

The following list of parties could help you identify where you stand.

Essentially, Republicans prioritize reforming several aspects of America’s social life: Health care, education, and the economy. Their manifesto mentions, “The Republican Party is committed to improving our quality of life in every part of California.”

“If you’re socially tolerant and fiscally responsible, you’re a libertarian,” suggests the Libertarian party’s manifesto. Individual liberty, shrinking government, and free trade and education are among the motives of this political group.

Currently one of the largest parties in the U.S., American Independent believes in “liberty and justice for all under God.” Of significant importance are strengthening and protecting the right to live in the party’s manifesto.

Remember: Political Typology Is a Spectrum

You could vote for a Republican presidential candidate and oppose the abortion ban. It’s possible to endorse a Democrat party candidate and support the gun ownership laws. In short, you don’t have to be on either end of a political spectrum to align with a specific party.

So, please take the results lightly and don’t use them to discriminate against any groups.

QuizExpo does not endorse any of the political parties mentioned in the quiz. The following are independently curated questions with no favoritism involved.