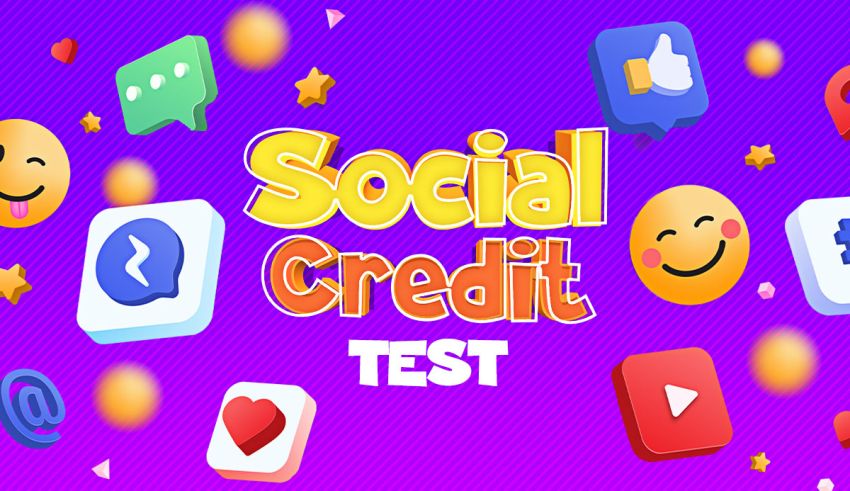 Are you prepared for a social credit test? This quiz reveals if you pass the Zhong Xina vibe check and score high in the ultimate CCP citizenship test.

It’s a questionnaire with up to 20 questions to determine if you’re a loyal member of the Chinese Communist Party or not. The social credit test is an internet meme inspired by the Chinese government’s actual surveillance and ranking systems to blacklist or whitelist citizens.

The TikTok Version of the Social Credit Test

The questionnaire went viral on TikTok with the help of fictional characters like Zhong Xina (the Chinese John Cena) and the Wok (the Asian Rock). It criticizes the PRC government’s policies with questions like, “Is Taiwan a country?” or “How many kids are you allowed to have?”

The Actual Version in China

The real social credit test is a scoring system that categorizes Chinese citizens based on trustworthiness. It goes through the government’s big data, which includes information about people’s online/offline behaviors, financial decisions, and purchases, to declare who’s an excellent civilian and who’s not.

What About the Test on This Page?

The questionnaire you’re about to take is inspired by the TikTok version of the social credit test. It has funny questions that cannot be taken seriously. But the results would be shockingly accurate. All other CCP meme tests have questions like “What happened in Tiananmen Square in 1989?” or “Do you like the United States?” So, we also renewed all the questions, so it’s not the same boring list you see on the internet.

Find Out if You’re a Good or Bad CCP Citizen

The goal of the credit score test is to assess how good of a Chinese citizen you could’ve been and how big of a communist you are. Would the PRC government accept your citizenship application, or you’d be sent to an underground jail after the test? That’s the question we answer here.

The Funniest Social Credit Test Ever with Weird Results

We created a personality-analyzing test while all other Chinese credit quizzes are trivia! It’s the first time you’ll actually receive an analytical result explaining what kind of Chinese citizen you could’ve been. We use your responses to categorize you into hilarious groups. And your friends would laugh their butt off rolling on the ground after reading your test results. (Guaranteed).

By the way, if you’re into internet meme quizzes, you might also like our other viral test called “How Many Camels Am I Worth?” Yes, we know that’s probably the strangest name one could come up with, but it is what it is.

Most boomers and millennials don’t get Gen-Z‘s sense of humor. So, many actually wonder why people look for social credit tests online. But the answer is simple: the Chinese Communist Party test is hilarious. Those who don’t get it probably have never seen a Zhong Xina or the Wok meme.

The Gen-Zers believe that the traditional humor sucks. (Sorry, boomers). So, when it comes to political sense of humor, they rather things like the social credit test instead of classic dad jokes about the soviet unions.

But the good news is that the social credit test on this page is not Gen-Z-exclusive. Yes, the young would probably enjoy it the most. But boomers, millennials, and all other generations are welcome to get scored.

How the Actual Social Credit Scoring Works Vs. Online Tests

The Chinese government uses big data to score citizens on a scale of 0 to 950. It’s a combination of your financial status and public behavior. The higher your score is, the better citizen you are. However, online meme tests use other witty factors such as your inner communist beliefs to score or analyze your personality.

Examples of Questions of the Social Credit Test

Most common social credit questions you see on TikTok:

Things That the Test Considers to Calculate Your Score

Okay, you’re almost ready for the internet’s best social credit test. But you need to know what the criteria are before diving into the questions. Our ultimate quiz considers the following factors to determine how good a CCP member you are.

You cannot be a non-communist and pass the Zhong Xina vibe check. The social credit test wants to make sure that you’re loyal to all the fundamental beliefs of the CCP and despise any other views.

Your love for the Chinese government

There’s no way to pass the social credit test without showing your affection for the great government of China. You’re secretly watched throughout the test to ensure your answers are not against the officials’ will—or the Wok himself will punish you.

Your knowledge of social credit memes

Yes, it’s a genuine vibe check. People who don’t know what’s going on with all the #scoialcretidtest memes on the internet will definitely score low. So, go back and do your homework if you haven’t already—and come back when you know everything about the culture.

The social credit test is an internet meme inspired by the anti-human-rights movement of some governments. The questions and the results should not be taken seriously. It’s not meant to offend any specific groups of people as it’s only aimed at certain political parties.