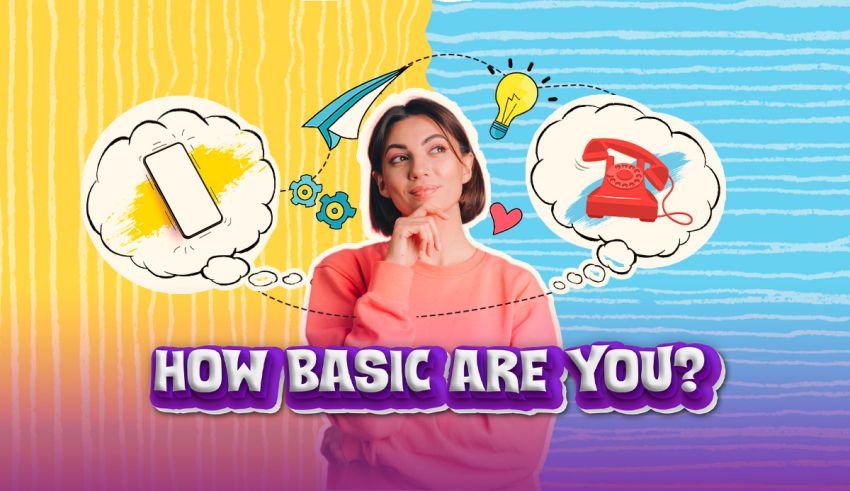 Let’s be honest, how basic are you? Take this pop culture, fashion, and social media quiz to find out your basicness stage. Are you a mainstream beeotch or a confident extra?

What Does Basic Girl or Bro Means?

Basic girl or basic bro have various meanings. The easiest way to put it is, “A person who loves mainstream music, fashion, and food and seems to have no personality of their own.” The idea is that you’re a loser if you love commercially feminine or masculine stuff.

Other cultures have different words for basic behaviors. British people use the slang term “Essex girl,” while Australians call them “Haul girls.”

The quiz is a set of twenty questions about your lifestyle and personality to detect your basicness level. It determines what vibe you give off to declare how basic, extra, hipster, or bad you are.

See What Stage Basic You Are

There’s a reason it’s called pop culture—it concerns the majority of society. So, we all have a certain level of basicness in us. But we don’t know how deep or severe it is. And that’s when the quiz comes into play. Answering our rather basic-ish questions could determine how big of a mainstream fan you are. Plus, it could reveal how your behaviors compare to the stereotypes.

Consider All Other Possibilities

Yes, the big question is, “How basic are you?” But that’s not the only possible outcome of the test. You could be, say, a hipster who acts the opposite of a basic bit** or bro. Or you could be a bad beeotch who’s a successful version of a mainstream fangirl/boy.

Here are all the other possible results of the quiz and what to know about them.

What happens when you refuse to follow mainstream trends? You become a hipster. The problem is that they still follow the trends just to act or behave in the opposite direction.

As defined on Simonandschuster.com, a bad beeotch is “A self-respecting, strong female who has everything together.” Think Beyonce or Nicki Minaj. These individuals have reclaimed the b-word turning it into a positive and rather complimentary term.

This self-explanatory term refers to people who are dramatic about everything. They exaggerate feelings and become dramatic over the most ignorable details.

How the Test Tells if You’re Basic

To determine a person’s basicness, three things must be considered: the symptoms, interests, and behaviors. Here’s how the quiz reviews all the criteria to develop a reliable answer.

Back in 2009, when the term basic bit** was coined, it referred to mean showy, arrogant, airheaded gossiping girls. But the symptoms have changed throughout these years. Nowadays, you’re basic AF if you like any pumpkin-flavored drink, wear UGG boots, use lots of hashtags, and love shopping at Target.

We have created a long list of basicness symptoms to compare your behavior with. The higher your behavior matches them, the more likely you are to be a basic beeotch or bro.

If your pop culture knowledge is equal to or can surpass the Office’s Kelly Kapoor’s, you’re a basic girl or boy. Being obsessed with celebrities and mainstream gossip is an undeniable sign. And the test does its best to determine that.

Do you own one of those “Live, Laugh, Love” signs hanging somewhere in your house? Do you turn random words into hashtags in your Instagram post? Do you judge people based on their clothing brand? Well, these are some of the signs you might be a super-basic bit** or bro. The test looks for such behaviors to expose how basic you are.

The Quiz Works for Basic Bros, too

You have a basement called the man’s cave, you brag about how many drinks you had last night, and your friends are “your boys.” Sounds familiar? If yes, you’re basically a basic bro—no need to take the test.

But participating in the test could actually reveal HOW BASIC YOU ARE because that’s a whole other story.

Is It Bad to be Basic?

No, being basic is not bad because there’s nothing wrong with loving mainstream music, food, fashion or films. Daisy Buchanan, in defense of being basic, writes, “Dismissing female cultural signifiers might look like a feminist act, but it’s rude. We shouldn’t slate a woman for her interests.”

Calling others basic is a stereotype that people use to differentiate themselves and feel better about their lifestyle. They might suggest that it’s not okay to be basic because you’d have to give up your own choices and let others’ tastes define your interests. But people who say that purposefully avoid mainstream stuff—so their taste is also defined by what others like or dislike.

The Problem with Most Online Basicness Tests

While looking innocent on the outside, most online basic quizzes have rude results. They might claim that it’s “just for fun” or bring up excuses like that. But you cannot insult a person for loving mainstream stuff or normcore fashion.

Our quiz is currently one of the few judgment-free and respectful options you have. Our editors have done their best to keep things both fun and polite. So, you’re guaranteed to love the results regardless of your interests, views, and lifestyle.

A Quiz that Lets You Own Your Basic Taste

“If other people want to reclaim ‘bitch’ then I’m taking back ‘basic,’” wrote Daisy Buchanan in her famous post in the Guardian. If loving scented candles, wearing UGG boots, using hashtags, and posting images with cute poses is what makes you feel good, just do it.

Don’t even bother to overthink how extra or basic you are because those are meaningless BS terms. Although our quiz might call you basic, extra, hipster, or something along the same lines, we will ensure to remind you of your uniqueness and don’t judge you for who you are. And don’t forget that it’s all for fun. So, no hard feelings. Peace.

QuizExpo is against discrimination and sexism. The results of the basic test include no insulting or humiliating subjects. Please, contact us if you find any questions or results inappropriate. We’ll take care of the matter as soon as possible.