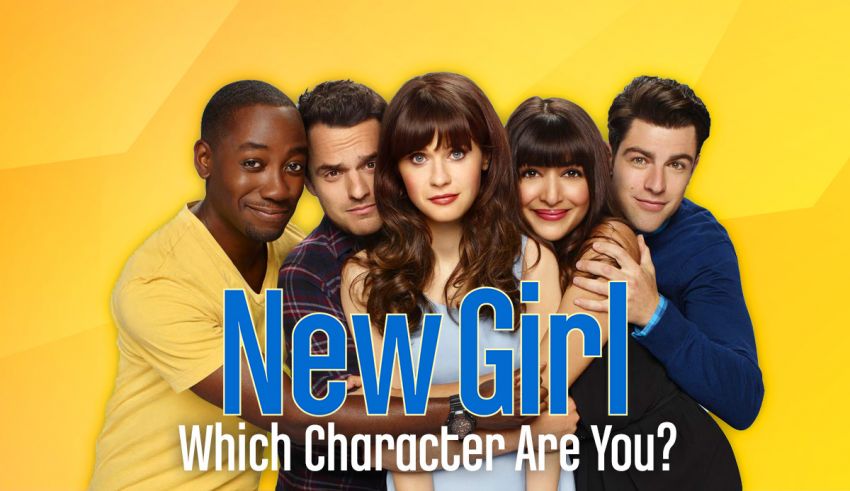 Which New Girl character are you? This New Girl Quiz discovers if you are Nick, Jess, Schmidt, CeCe, Coach, or Winston through 20 simple personality questions.

Ever since Jessica Day met the Gang at the Loft, fans have wanted more of the show. While the series ended in 2018, we created a 2021 updated New Girl quiz for the fans who still love the show to this day. So, “can we just take a minute to celebrate the Gang once more?”

Here is everything you need to know about the New Girl test on this page. (And more).

How Does the New Girl Quiz Work?

We created a personality test to answer the “which New Girl character are you?” type of questions. The premise of the questionary is simple. You answer a set of questions revolving around your interests, memories, relationships, etc. Then the algorithms match your character with one of the New Girl personalities with the highest similarity percentage. More detail on that below.

· Analyzing Your Past Relationships (Nothing Personal, Though)

The New Girl characters keep getting in and out of relationships throughout the show. That is why you should answer some relationship-related questions right off the bat. Of course, we will not dive deep into your past or look for anything specifically personal. It is only going to be a couple of curiosity-feeding questions.

If you think about it, the show’s plot ignites with a breakup. Jessica finds out that her boyfriend has been cheating on her. And she leaves their shared apartment, ending up with the Gang at the Loft (4D). So, knowing your past relationships would help with answering “which New Girl character are you?”

· Inspecting Your Views on Love

Love is the center of the plot in NG. From the moment Jess and Nick start flirting to the very end of the show, love is all over the story. So, it would be a miss not to ask about your views on affection when finding your New Girl character match. Each personality in the show seems to perceive romance in their unique way. So, knowing your opinions and thoughts makes it easier to answer the “which New Girl character are you?” question.

One of the significant parts of the NG story is the friendships. Almost all characters of the show have their specific friendship styles. And that sets them apart. So, when looking for an answer to “which New Girl character are you?” it is good to review your companionship style. The way you interact with your friends can reveal a lot about who you are.

Uncovering your true personality is one of the primary functions of the New Girl quiz. There are many plot-related questions in the test that help us analyze your inner self.

Which New Girl Characters Are Included in the Test?

The LA Gang is here, baby! All the main characters of the New Girl show are included in this test. Below you see a list of them plus some extra information about their characteristics.

She is the protagonist of the show. While at times she seems clumsy and careless, Jess has a golden heart. Her girly sides make her a lovely personality regardless of the situation and time. But you cannot ignore her ambitious and determined sides no matter what.

He is an apathetic guy who makes us laugh through his sarcastic sense of humor. People who match with Nick in the Which New Girl Character Are You quiz are usually good at reading others’ feelings. But it is relatively complex for most of them to express their own emotions.

Being Jessica’s best friend, CeCe is a supportive, reliable, and lovely person who is always there for her friend. People who match with her in the New Girl quiz are usually protective, lively, and bubby. Plus, they are a guru when it comes to relationship advice.

Charismatic, traumatic, and good-looking. Schmidt is one of those characters who you like and dislike at the same time. He seems to be a self-centered male-alpha type of man. But he is also an emotional boy with a somewhat sad background. People who end up matching Schmidt in the Which New Girl Character Are You quiz are usually confident and talented—with lots of time to think about how they look!

Unintentionally funny. Perhaps that is the most accurate way to describe Coach. He is an athletic and energetic personality who is not afraid of speaking his heart. (At least that is how he seems to be). Those who match Coach in the New Girl quiz are reliable, friendly, and masculine—not in a toxic way, though.

An unpredictable, lovely, and loud personality. That is Winston in three words. People whose soulmate is Winston are prank-lovers who love to be in the spotlight.

The test on this page does more than answering “which New Girl character are you?” We added some fun features to the results to make them more attractive to the fans. Here is what you get by finishing the questionary.

We analyze your personality.

A brief personality analysis based on your New Girl character is waiting for you. We will point out your characteristics and give you a rundown on how people might think about you.

We reveal your New Girl crush.

Shipping is a favorite part of engaging with a fanbase. So, by the end of the test, you will find out who your possible crush is regarding your choices.

We offer some fun stuff about your soulmate.

Discovering which New Girl character you are is a fun activity, especially when you have watched all the show’s seven seasons. However, we think the results can be more than a simple answer. So, you will face some surprise items such as quotes, catchphrases, and trivia in your results, as well as the actual results.

Look Up the Sky and Ask, “Which New Girl Character Am I?”

A popular question among the fans is, “which New Girl character are you based on your Zodiac sign?” That is why we created the following table to provide you with the ultimate answer. Below you can see what each character’s star sign is to match it with your own.

QuizExpo does not own any of the images used in this test. The 20th Century Fox Television owns the photos used in the New Girl quiz.