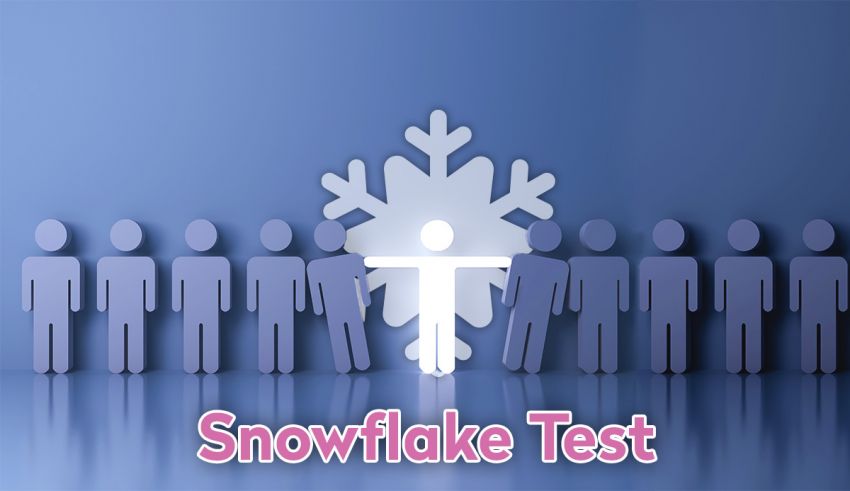 Take this online Snowflake Test to reveal if you are a hypersensitive person. Are you a special, or unique snowflake? Find out by this 100% honest analysis.

What Does It Mean?

“Snowflake” is a slang or derogatory term referring to people who act as if they are different from the rest of the world; and, therefore, require special treatment or privilege. In recent years, the word is mostly used to talk about touchy and easily offended individuals. (More on this below).

A Controversial Test for the Gen-Zers and Millennials

The idea is that most Millennials cannot handle the harshness of politics and life. And the Gen-Zers are squeamish and cancel-culture-oriented. So, the quiz proves if the idea is valid or not.

Note: the term has a couple of different meanings. We use it in the Snowflake Test as a way of describing too delicate or touchy persons.

The Snowflake Test is a set of twenty respectful but still triggering questions to assess your toughness. None of the test items include racist, homophobic, or hateful options. So, it is a safe quiz for everyone. But you face challenging ideas and controversial concepts throughout the test.

We created a real Snowflake Quiz with actual analytical results. But most online alternatives provide you with fun and flippant questionaries.

The goal here is to answer the following questions:

The History of Calling Others “Snowflakes”

Although some believe that it is a Fight Club book catchphrase, the term Snowflake is much older. Historical data shows that Americans first called some people with such words back in the 1860s, during and after Civil War. It described slavery supporters who were primarily white males.

Then, in the 1970s and during the Black Power movement, people started using the term as a racial slur. Back then, “Snowflake” referred to black individuals who acted too white—in the eyes of others.

However, the modern usage started in 2015—and as a byproduct of political rallies. The left-wing called right-wing millennials snowflakes, suggesting that they are ultra-fragile. As an opposing move, the left-wing did the same thing, and they labeled Donald Trump and his supporters “snowflakes”—as they seemed to be mad at and offended by everything.

Flashforward to 2021, the word is an umbrella term to describe anyone who cannot stand contrasting opinions or is easily offended.

What Do People Use the Snowflake Test for?

If the word has a negative meaning, why do some ask, “Am I a snowflake?” Or why would someone want to take a personality quiz to prove that? You can find four main reasons why people participate in such questionaries despite the undesirable connotations. See below for more.

Call-out culture is a thing. Many millennials and Gen-Zers feel left alone and isolated due to this phenomenon. Recently, one method to cancel individuals has been labeling them Snowflakes. So, some individuals take online tests such as the one on this page to see if they deserve such tags or not.

In 2017, the CEO of Silent Partner Marketing used a self-innovated hypersensitiveness test for his job interviews. His goal was to exclude too fragile or hypersensitive applicants from the process. Kyle Reyes Snowflake Test went viral and inspired many other employers to employ the same method. And that is why people still look up such quizzes online to give them a shot before applying for a job.

For some millennials, Gen-Zers, and even Zillennials, the Snowflake test is only a self-assessment tool. They want to make sure that society does not count them as easily broken and weak.

Since 2015, the term has been a part of political debates. So, people might take a free Snowflake test only to prove their ideologies. Our questionary includes both the left- and right-wing beliefs to decide which party would call you soft or prickly.

Why Are Some Against the Snowflake Tests?

The 2010s were full of successful social justice, and anti-discrimination movements such as Black Lives Matter. But some suggest that innocent-looking terms like “snowflake” are forming new biases and bigotry that damages certain groups in societies. And that is why the online tests have been called out and disregarded by some activists and influencers.

Gen-Zers, for instance, have been attacked by right-wing supporters for being more open about their emotions and mental health issues. Simone Biles, an American artistic gymnast, was the most recent victim of such strikes. (She refused to compete in the Olympics finales due to her unstable mental health. And some called her weak, selfish, and privileged for that).

What if the Test Called You a Snowflake?

We created a test that does not directly call anyone names and does not label you. All it does is analyze your opinions to see who might give you such titles and why. So, the Snowflake Test on this page is an analytical way of identifying what group of people think you are easily offended. But note that the results do not confirm or back their opinions.

Things to Have in Mind Before Taking the Quiz

We only suggest the test to those who already know that snowflake-like labels are NOT meaningful. Such derogatory words belong to historical archives and not the modern world. Although we created a helpful quiz, we think you should keep the following things in mind before taking it.

Stop Using the Term (if You Haven’t Already)

Yes, the Snowflake Test does use this discriminatory word. But that does not mean that we are okay with it. No matter what your intentions are, you hurt people by calling them such names. Some even propose that the term has a deeper and darker meaning that is also disgusting. According to folklore beliefs, the Nazis coined the term to refer to the ashes of the burned bodies in camps.

Note: such claims about the origin of this word are not confirmed by any academic organization.

You probably know that each snowflake has a unique shape like the humans’ fingerprints. So, if someone calls you that, you can make sure that your exclusivity is bothering them.

Here are a couple of ways to respond to biased people trying to hurt your feelings. Julie Sprankles offered the following methods in her 2017 article published on Bustle.

Julie says, “A simple thank you might throw off the person who intended to use this term as an insult for you.”

Using bigoted terms against others is a sign of toxicity. So, you can always shut the person down and avoid further conversations for the sake of your mental health.

Snowflake has been used to call out pro-slavery and even certain individuals of black communities. So, it is wise to let the speaker know that they are using an unacceptable word. And it reflects their lack of respect for significant historical and social movements.

Not everyone is aware of the horrific origins and negative connotations of this term. So, make sure to use the Snowflake Test and other online tools to spread awareness and help people. One way to do so is by sharing your quiz results with others on social media, as we included helpful information there.

We, as the QuizExpo team, are against any discrimination and social injustice. The Snowflake Test is not meant to agree with or back ideas that label generations weak or incapable. Please, take the results lightly, and feel free to contact us if you think the questions or results are inappropriate.