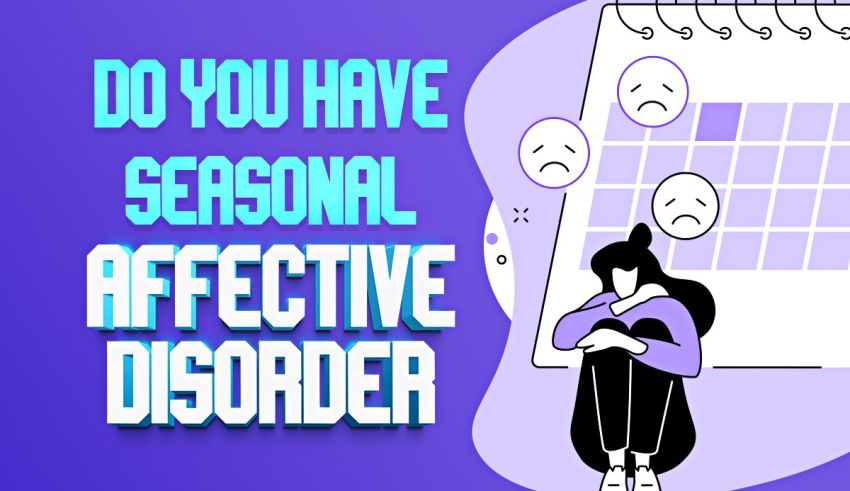 Do you ask yourself, “Do I have a seasonal affective disorder?” every winter? Take this DSM-5 quiz to find out if you have the winter blues.

What Is Seasonal Affective Disorder?

Formerly known as a seasonal affective disorder, depressive disorder with a seasonal pattern is basically major depression that worsens at the same time each year, often in autumn and winter. In other words, it specifies MDEs that occur in specific seasons.

The theory is that a change in serotonin, the hormone that regulates mood, and melatonin, which regulates sleep, causes the seasonal affective disorder.

The lack of sunlight during the winter—especially in higher altitudes—complicates the production of serotonin and melatonin, affecting your energy level, sleep or chronotype, and mood.

Other possible causes are childhood trauma, genetics, and socioeconomic reasons.

The most common symptoms of SAD are oversleeping, irritability, low energy, weight gain, appetite change, and hypersensitivity during a particular time of year.

Find Out if You Have It with a SAD Test

If you want to know whether you have a seasonal affective disorder, take this 20-question psychological quiz to assess your symptoms. The current test is designed based on the DSM-5 guidelines and determines if you have SAD based on your self-report.

Different Types of Seasonal Affective Disorder You Might Have

SAD is an umbrella term for any Major Depressive Episode (MED) that happens in warm seasons (spring and summer) as well as cold seasons (autumn and winter). However, studies show that people going through SAD in summer have different symptoms than those who experience the disorder in winter.

However, the same disorder in summer is distinguishable through lack of appetite, weight loss, anxiety, and insomnia.

It Could be a Bipolar Disorder

Understandably, your temporal mood swings have made you ask questions like, “Do I have a seasonal affective disorder?” But the thing is that that’s not the only possibility: You could be struggling with other seasonal disorders like BPD and bipolar personality disorder.

As doctor Grande points out, “seasonal” is a specifier for personality disorders such as major depression and bipolar.

3 Sigs that the Seasonal Affective Disorder Test Looks for

Because SAD is not a distinct disorder, diagnosing it is challenging. However, the test identifies the following signs to deliver accurate results.

#1. Temporal relationship between seasons and MDEs.

As the name suggests, the seasonal affective disorder should have distinctive connections to specific periods. So, the test tries to figure out whether your sadness and moodiness worsen during any of the four seasons.

Most people with the winter blues experience a full recovery during other parts of the year. For example, one with depression in autumn might feel entirely energetic during summer. So, that’s another indicator of the SAD test.

You should have more temporal major depressive episodes than non-temporal ones. So, if you’re moody and depressed throughout the year, it’s unlikely you have a seasonal affective disorder.

SAD? Take the Quiz to Discover Why

Do you still wonder if you have a seasonal affective disorder? If yes, take the following psychology quiz and evaluate your mood. The test can identify if it’s SAD, BPD, MDE, or another disorder.

QuizExpo is not associated with any of the names/organizations mentioned in the Seasonal Affective Disorder Test.

Please, do not replace the quiz with a clinical diagnosis and avoid self-diagnosis or self-prescription based on the results.