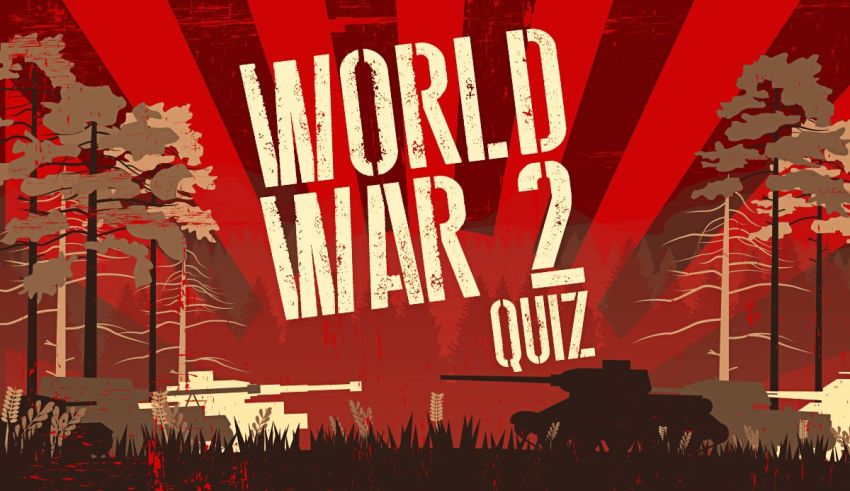 This World War II Quiz asks you 20 insane trivia questions. How much do you know about WW2 history?

Comprised of twenty history questions, the World War 2 quiz is a trivia test. It assesses your knowledge of the topic and gives you a score based on your correct answers.

However, the current test includes questions about pre-, mid-, and post-war facts.

Suggested: If historical trivia is your thing, check out the Amazing US History Test next.

What Questions to Expect?

Historians uncover more WW2 secrets every day. But how updated is your knowledge?

Have you heard of the carrier pigeon and its secret message discovered in 2012? What about the only German aircraft carrier that went missing for 60 years?

Arranging the pieces of the WWII puzzle in chronological order is where things get complicated. And the quiz benefits from that through timeline questions.

For instance, which one do you think ignited the Second World War? A) Japan’s invasion of Manchuria, B) the Italian invasion of Abyssinia, C) German and Italian involvement in the Spanish Civil, and D) The Nazi Army’s invasion of Poland.

Fact or fiction, or as we call it, WW2 myth vs. truth, is a fan-favorite section. Although the questions come with two (true or false) options, they tempt you to google the correct answer.

World War 2 facts are sometimes hard to distinguish from fiction. Take Hitler’s role in the war. Many still believe he’s the only one to blame. But in reality, the Nazi generals accompanied—and carried out—his plans the whole time.

But let’s see how well you can tell fact from fiction.

How Hard Is It?

The World War 2 Quiz gradually gets more complicated. In other words, the first few questions are easy, assessing your general knowledge. But become challenging as you progress, with the last questions being almost impossible to answer.

Here are a few examples of progressive questions in the test.

How to Interpret Your Score?

Your correct responses in the World War 2 Quiz are rewarded by points—one point per each. Here’s what your total score means.

Having five or fewer correct answers is terrible news. It indicates you don’t know much about World War II events—except for basic facts.

Scoring six to ten points means you’re interested in the topic. But it’s not high enough to beat the WWII Quiz.

Participants with 11-15 correct answers have above-average knowledge of the topic. Fun fact, less than 40% manage to score this high.

Although rare, some participants score as high as 20 in the World War 2 Trivia. We call them the EXPERTS! But generally, getting 16 points or more is an impressive result.

Ready to Put Your Knowledge to the Test?

The two most powerful warriors are patience and time. If you have both on your side, press the start button and dive into one of the internet’s hardest World War 2 Quizzes.

And hey, let us know if you beat the test—that’d be rare.

What’s Next? Try the US President Quiz.

QuizExpo does not own the images in the WW2 Quiz and intends no copyright infringement.