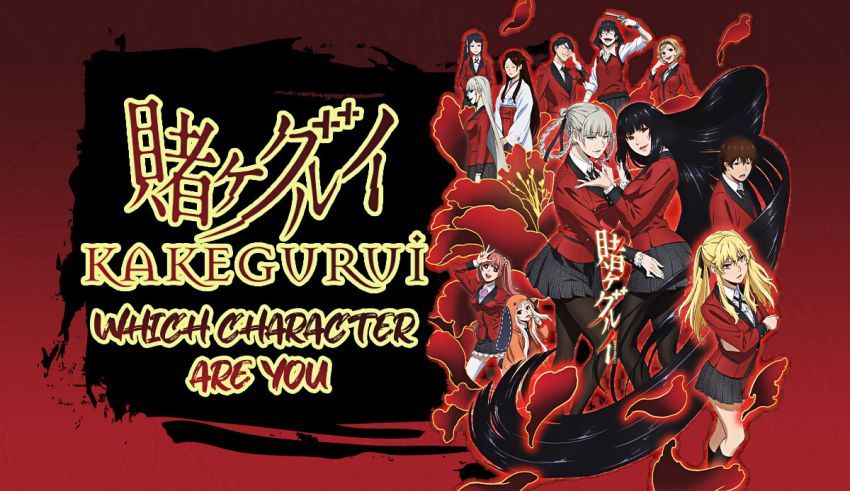 Otakus are going crazy about this quiz! Find out which Kakegurui character you are based on your guilty pleasures and bad habits. Are you Yumeko, Mary, or else?

Do you happen to ask things like, “What would I do if I were a Hyakkaou student?” Surely, Compulsive Gambler is an anime that causes such questions. But we have an actual test that reveals all that—and even more.

The Kakegurui Character Quiz is a set of psychological, controversial questions about your personality. It exposes your Dark Core, and helps you find out your anime counterpart. Here is everything you learn about yourself by taking the questionary.

The test includes all the main characters. Since it is a forced-choice question, your decisions reveal what type of person you are. We use that information to guess the anime character that resembles you.

Just like our popular Death Note Character Quiz, you have to face your dark side to get 100% accurate results. But it is designed in a way that even the most innocent participants find their perfect match.

Find out what your RANK is.

Hyakkaou students have a hierarchy of power. Your ‘donations’ to the school determine how valuable you are to the Council. However, the least contributing students end up being slaves. The Compulsive Gambler test decides what your status would be if you were one of the 3,000 pupils at this fictional private high school.

The highest rank in the Hyakkaou school power pyramid is the Student Council Member. People like Kirari Momobami, how created the Housepet system, fall into this category.

Such students set rules, hold events, and control other apprentices.

Some Kakegurui characters, such as Yumeko, become addicted to gambling. The personality quiz on this page assesses the chances of you forming such habits. So, you might be declared a pro gambler by the end of the test. (We are not sure if that would be a piece of good news, though).

The 100 least donating students turn into pets. Slave boys are known as doggy (Fido), and girls are called Kitty (Mittens). Our quiz exposes the possibility of you becoming a Housepet based on your answers.

Get a debt estimation.

Students who gamble are prone to owe money to their opponents. That would automatically push them down on the school’s power hierarchy. Unfortunately, the chances are very thin that a gambler could retrieve their previous status after that.

Your decisions throughout the questionary allow us to estimate your possible debt. It could be anything between zero to millions of Japanese yen.

One of the perks of taking the Compulsive Gambler Anime Test is that you meet your crush. We have a list of characters who people thirst over as a WAIFU or hot HOSBANDO. You get to know which one is your soulmate by the end of the questionary.

Find Out Which Kakegurui Character You Are (Without a Test)

If you are like Runa (i.e., easily bored), you might find the character quizzes dull. So, we wanted to give you a faster way to meet your anime twin. The following descriptions help you identify which student resembles you in no time.

But keep in mind that this method is not accurate. WE encourage you to take the full test to receive reliable matches.

Kakegurui fans would love to say, “I’m Yumeko,” when asked “which character are you?” She is one of the most popular students both in the show and in real life. People describe her personality as upbeat, charismatic, and bold. She enjoys taking risks, and is not afraid failing.

Her dark side resides in her lack of empathy with her opponents. She claims that it feels bad to have no remorse for those who lost to her. Yumeko is also a pro gambler, winning most of the games even when her opponents cheat.

She has a sharp memory, which comes in handy during games like Double Memory (Shinkei-suijaku).

She is the deuteragonist and a key character of the show. Mary is known as a somewhat sadistic and twisted girl in the beginning. And she happens to be cruel to most other pupils—especially her opponents. However, the events of the first season help her mature and become less egotistic.

Despite everything she goes through, Mary remains a competitive character. She tries to win every competition no matter what. And that sometimes lead her to seem selfish and careless.

Few fans would say, “I’m Ryota,” when asked, “which Kakegurui character are you?” That is because he starts as a timid and insecure student. People usually ignore him, and he does not stand for himself. However, 鈴井 涼太 is an intelligent, kind, and caring person.

He quickly understands his opponents’ tactics, using them against other players.

Ryota does not hold grudges. And he forgives people who hurt him. That makes him a levelheaded friend everyone wishes to have.

Despite being a supportive character, Midari is so popular that she got her own spin-off show. However, she is a twisted, masochistic, and impulsive girl. Her brutal honesty usually pisses off everyone else. And her selfishness, combined with her reckless attitude, makes it difficult to befriend her.

Ikishima is also suicidal. She enjoys inflicting pain in herself, and even precedes to ask others to do so. In an iconic episode, she lost an eye to an opponents while gambling. But that does not stopped her overbearingly hazardous lifestyle.

She is one of the rarest results in the Kakegurui Character Quiz. That is due to her complicated personality. She seems like an innocent cute girl on the outside. But deep inside, she has a sadistic and unpredictable nature.

Runa is easily bored, and she does not value humans’ lives. So, you might catch her enjoying others’ struggles or pains.

Despite all that, she believes in fair play. And cheating is her red line.

QuizExpo does not own any of the images used in the ‘Which Kakegurui Character Are You Quiz.’ Square Enix and Netflix own the said pictures.