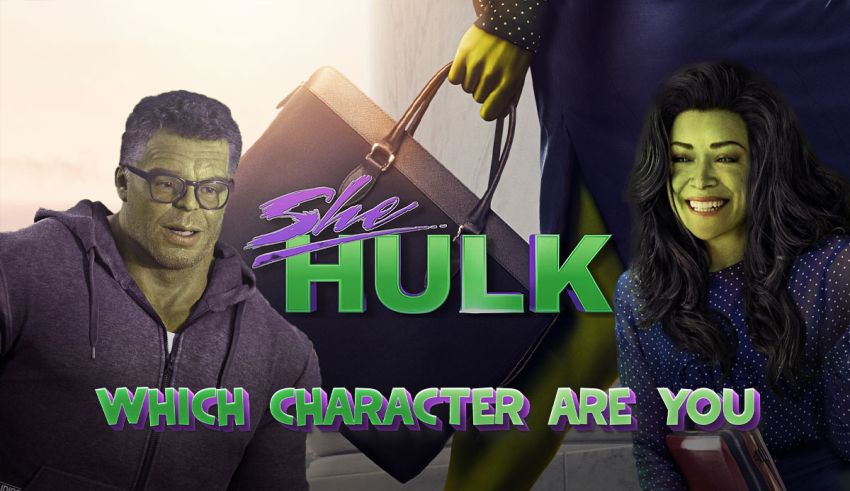 Hey, Marvel fans, which She-Hulk character are you? This superhero quiz reveals whether you’re Jennifer Walters, Bruce Banner, or Wong.

The Personality Quiz That Exposes Your She-Hulk Character

The She-Hulk character quiz is a set of 20 MCU-inspired questions that determine which of the Attorney at Law personalities looks like you.

She-Hulk: Attorney at Law is a Disney+ show exploring the story of Jennifer Walters, Bruce Banner’s cousin who turns into a green-hued giant after a car accident.

Compare Your MBTI Type to the Cast

A Myers-Briggs Type Indicator is the most accurate way to discover your matching Marvel character in She-Hulk.

But don’t worry if you don’t know your type. Our quiz unveils your MBTI before comparing it to that of the cast.

If you do know your MBTI type, use the following table to discover your soulmate.

How to Know Which She-Hulk Character You Are

Reading character descriptions is one way to find your match. And the following guides might help with that.

Personality-wise, Jennifer is an independent, self-assured, and clever lawyer. However, her She-Hulk persona is a bit sarcastic and narcissistic at times.

One of the strongest Avenger characters, Bruce, is a mild-mannered, intelligent, and rational guy. He puts on a bit of a mentor role in She-Hulk and tries to teach his cousin, Jennifer, everything he knows about being a super-strong green giant.

Wong’s personality in Attorney at Law is the same as in Doctor Strange in the Multiverse of Madness and Spider-Man No Way Home. He’s a hardworking, wise, and strict master who’s quite serious about his mission.

Jennifer’s best friend, Nikki, is a loyal, dependable, and supportive friend who’s always there for her loved ones.

Titania is a total narcissist who’s been using her superpowers to gain popularity on social media.

The She-Hulk Character Quiz Includes the Bad Guys too

The quiz has a database of all the bad guys introduced in the show’s nine episodes. And your answers will determine whether any of them resembles you.

You know how it is with superhero shows: There’s got to be a villain trying to destroy the planet. And Attorney at Law is no exception to that.

Anti-heroes like Abomination play a significant role in the story. They push Jennifer to her limits, making her use her superpowers despite her will.

We did not want to exclude one of the fun parts of MCU from the She-Hulk quiz. That’s why we added a list of villains to spice up the test results.

Ready to Let Out Your Rage?

Inspired by the Disney+ show and Marvel comics, the quiz offers psychological questions to assess your behavior.

Are you easy to anger? Can you control your rage? How do you express your negative emotions? The answer to these questions will expose your She-Hulk match.

Click “Start Quiz” and meet your MCU self in less than 5 minutes.

By the way, if you’re a comic book fanatic, we highly recommend you take our Marvel Trivia Quiz next. It’s going to challenge everything you know about the superheroes’ universe.

Marvel and Disney+ own the rights to the She-Hulk Character Quiz images, and QuizExpo does not intend copyright infringement.