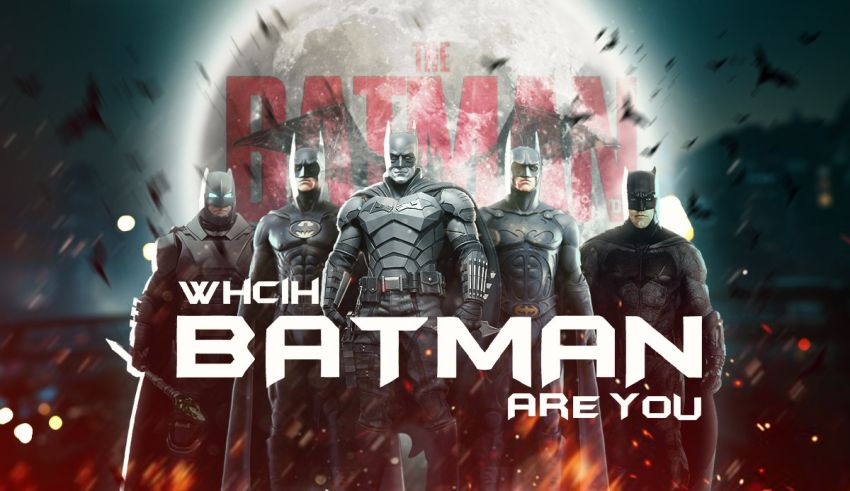 Don’t you wonder which Batman you are? This quiz reveals the bat within you. Out of all 11 actors who’ve portrayed the Dark Knight, which one is similar to you? Let’s find out.

It’s a personality test that compares your persona to all the Batman movies and voice actors. The goal is to identify which one you present in real life based on your motives, actions, decisions, and even appearance.

Unlike our DC Superhero quiz, you’ll only find your Bruce Wayne lookalike—and other comic characters such as Superman or Joker are omitted.

Which of the 11 DC Batmans Are You?

Contrary to Marvel characters, DC heroes frequently change actors. And that has led to having eleven different actors for one superhero: The Caped Crusader. So, it’s become more challenging for fans to find their perfect match.

Don’t look any further if you’ve been looking to find out which Batman you are because we’ve got you covered. After asking you twenty simple questions, the Batman Actor Quiz reveals which of the eleven bats you represent in real life.

The Search for the Perfect the Caped Crusader

Ironically, some DC fans can’t decide which Batman they are since there are too many options. Maybe Hollywood has the same problem. No matter how hard film companies try, they never get close to fulfilling all the fans’ expectations. And the Dark Knight seems to be too challenging for actors to portray no matter what.

Oscar-winning actors have tried their hands at the role. But no one has been able to break the curse and play the perfect Batman.

It’s said that Adam West’s version of Bruce Wayne is probably the closest one to the original comics. But if you ask fans, “Which Batman are you?” not many would pick him. He portrays a bright, goofy, and even happy-go-lucky superhero who’s also extremely rich. (The perfect cringe combo).

Some suggest that Christian Bale’s rather dark and gloomy Bruce is way more interesting for the DC cinematic universe. And others think Robert Pattinson was a proper choice for the role because he expresses more emotions and humanizes the rich superhero.

Despite all the disagreements, one thing’s for sure: There’s not just one successful Batman actor. And that’s why we created this quiz to help you find your own perfect Dark Knight.

How Does the Test Decide Which Batman You Are?

We have created accurate profiles of all the actors who’ve played or voiced Bruce Wayne throughout these years. When you take the test, your answers allow us to generate your virtual avatar and compare it to that of the actors. And that’s how we get to decide which Batman you are.

Here’s what you need to know about the test:

#1. It analyzes your take on the franchise.

Are you a Batman comic enthusiast or a cinematic universe fan? Do you believe in the non-lethal approach of the Caped Crusader, or do you think he should be more aggressive towards DC villains? These are questions that could help us find your matching Batman actor.

Each director and actor has added a new perspective to Bruce Wayne’s personality and lifestyle. So, we’d like to know what you think about their decisions before revealing your counterpart.

#2. It lets you make tough decisions as Batman and reviews them.

Bruce has PTSD, and he has to fight the criminals of Gotham city at the same time. Throughout his journey as a superhero, he has to make lots of difficult decisions, some capable of changing millions of people’s lives. So, we want you to do the same thing in order to expose your inner Batman.

The quiz includes some controversial questions that put you in catch-22 situations. And you have to pick an option that makes the most sense since there are no right or wrong options.

#3. It asks questions about your appearance and compares them to different Batman actors.

Your physical features and style matter when trying to find out which Batman you are. So, the quiz includes some simple—not-so-personal—questions about your appearance to get that out of the way and discover the perfect version of Bruce Wayne for you.

#4. It creates your virtual avatar and looks for your perfect match.

Based on your responses, the quiz creates your profile and prepares it to be compared to that of the DC Batman actors. It takes a few seconds for the algorithms to determine your match and reveal the results.

Why do Fans want to Know Which Batman They Are?

Each actor brought a new point of view to Bruce Wayne’s life. So, Batman is one of the few comic characters who have many different personas. Although most of them have many features in common, the slight differences make fans want to know which persona they could’ve had.

Some examples of the differences between Batman actors’ take on the character.

Although a classic, West’s Batman is probably the brightest and most kid-friendly version of the Gotham Knight. He portrayed a rather ludicrous and comical Bruce who enjoys fighting criminals and making jokes about their costumes.

Contrary to Adam West, Bale created a wounded, depressed, and dark version of Batman, which matched Nolan’s trilogy. His character didn’t make any jokes and wouldn’t bother to smile at others.

Ben’s Batman seems to be tired of all the superhero things. It seems like he wants to quit and forget about his bat suit one way or another.

The latest Batman is much more emotional and human. Pattinson tried to focus on Bruce’s feelings instead of his badass hero aspect.

You should know that not every Batman actor has been praised for their role. George Clooney, for example, is among the least favorite Caped Crusaders of all time. So, some results might not make you happy—and it would be wise to be prepared for them. (Just saying).

QuizExpo does not own any of the images used in the ‘Which Batman Are You Quiz.’ No copyright infringement is intended. Please, contact us with any concerns about removal requests.