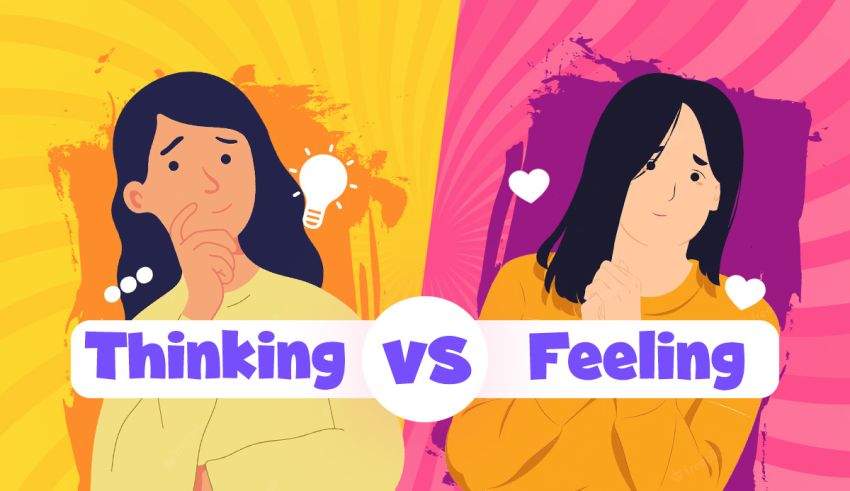 The thinking vs. feeling test has 20 questions that reveal your MBTI judging axes. It focuses on your decision-making style to see if you’re a thinker or feeler.

Thinking Vs. Feeling: A Test to Discover Your Judging Axes

What follows are a set of twenty judgment- and decision-related questions to categorize you into one of either end of the Thinking (T) and Feeling (F) spectrum.

Similar to the Realist Vs. Visionary Test, the goal is to identify how logical or emotional your approaches are. Plus, the quiz unveils the way you express your thoughts and sensations according to Introverted (i) and Extroverted (e) dynamics.

If the idea sounds confusing, allow the test to simplify it. You do not need to understand any of the Myers-Briggs principles to participate. And the results will elaborate on each combination’s meaning.

Who Is a Thinking Person?

A Thinker (also referred to: Thinking or T) is a person with logic-oriented judging axes. Such an individual would base their decisions on external facts and objective opinions. For example, a Thinker (T) would treat everyone equally according to the rules, allowing no exceptions.

Who Is a Feeling Person?

A Feeler (also referred to: Feeling or F) is a person with value-oriented judging axes. Such an individual would make decisions based upon subjective factors and inner conclusions. For example, a Feeler (F) might allow exceptions to the rules or break them for the greater good.

Misconceptions that the Test Resolves

Some employ the literal sense of the terms to define the types. Others believe that it’s unscientific to assume people use only one particular aspect of their persona when making decisions.

But both ideas are kind of wrong.

Although the stigma around the Thinking vs. Feeling idea is overwhelming, the test attempts to resolve three dominant fallacies.

Never should you assume a T is a logical or intelligent individual, whereas an F is overly emotional or illogical. The concepts of Thinking and Feeling distinguishes two different decision-making methods that both include thoughts and emotions.

The quiz doesn’t have any gender-biased questions to influence the results.

Data shows no correlation between your gender identity and judging axes. Unlike popular belief, women are not natural Feelers—and, similarly, men are not born as Thinking creatures.

#3. There’s no specific benefit in being a thinker or feeler.

None of the test results are biased toward any end of the spectrum.

Thinkers vs. feelers in the workplace is a debatable topic. While some may suggest specific benefits to being either of the types, there has been no scientific data to back that. And a healthy work environment is ideally a mixture of both.

The same can be said about other aspects of life, too. Your Fi-Te or Ti-Fe function doesn’t come with any advantages. But you can turn them into practical aspects of your character, improving your communication style.

The Influence of Other Myers-Briggs Dichotomies on the Test Results

Thinking vs. Feeling form only one of your preferences regarding the four MBTI dichotomies. So, determining your type based on one sole aspect (i.e., T or F) is inaccurate.

You are about to take a quiz that considers all four pairs and generates accurate results according to your preferences.

Your question might be limited to “Am I a Thinker or Feeler?” but the results are not. By the end of the test, you find out how other aspects of your judging axes, such as Introversion or Extroversion, might affect your T or F.

What Are Some Examples of Thinking vs. Feeling Nature?

Note: It’s difficult to give examples of T or F personalities. It’s because judging axes are about the process of concluding—as opposed to distinguishable actions. In other words, you might see a Thinker and Feeler performing the same actions but with different intentions and logic.

Questions That Matter More Than “Are You a Thinker or Feeler?”

Overthinking your decision-making process can backfire, making it even harder to distinguish right or wrong. However, you can come up with better questions to ask yourself.

Here are a few valuable topics to think about instead of focusing on the Thinking vs. Feeling dynamic.

Is there anything wrong with my decision-making approaches?

If you are happy with how you’re managing your life, then why bother overthinking it? Of course, it’s always wise to reevaluate your behaviors. But that has nothing to do with determining if you are a Thinking or Feeling person.

Am I a fair person?

Both Thinkers and Feelers have one common goal: Making fair decisions. So, if you have already achieved that purpose in life, you need a test to tell you what’s going on.

What is my priority when making decisions?

If you care about everyone’s well-being, you are good to go. There is no specific advantage to being a Thinking or Feeling person. But being a considerate decision-maker could validate your personality.

You are only twenty questions away from better understanding your nature. The Thinking vs. Feeling test has everything you need to analyze the type of person you are based on your judgments.

QuizExpo is not associated with any of the names/organizations mentioned on this page. The test is an independent work based on the MBTI principles, and no copyright infringement is intended.