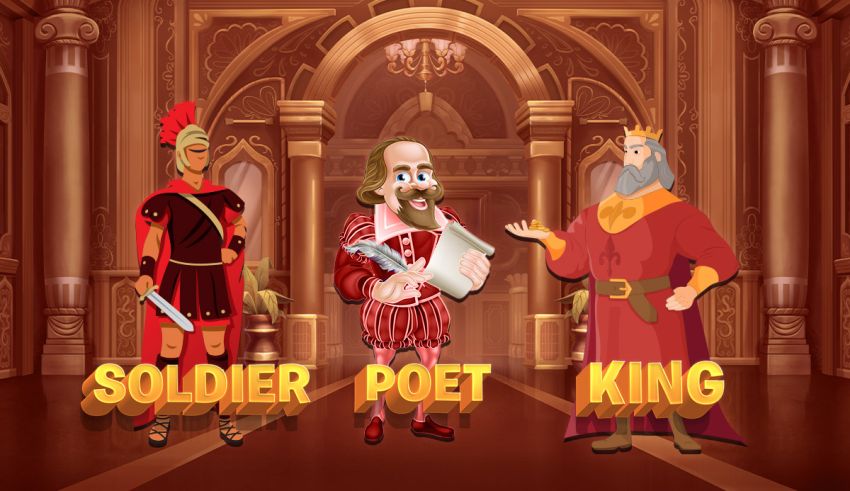 Are you the Soldier, the Poet, or the King? The Soldier Poet King Test reveals how you deal with emotional abuse.

What Is the Soldier Poet King Test?

The test reveals how you deal with childhood traumas and toxic relationships as the King, the Poet, or the Soldier.

What’s the Backstory of the Soldier Poet King Test?

The Soldier Poet King Test refers to the lyrics of a folk song with the same title. In the song, the singers talk about a king, a poet, and a soldier that will come and tear the city down. This can be interpreted as how one will overcome their traumas.

The three characters in the Dear Wormwood album (the King, the Poet, and the Soldier) are different trauma survivors who each treat their pain uniquely.

When the characters “tear the city down,” they leave their suffering behind and celebrate the victory by saying, “O lay, o lord.”

C.S. Lewis’s The Screwtape Letters, a book about a devil writing letters to a human, inspires the Soldier, Poet, King song, which has led to the eponymous personality test.

With the personality quiz, you get to find out what type of survivor you are—and even if you’ve caused any traumas for others by being toxic.

What Do the Soldier, the Poet, and the King Mean?

In the Soldier, Poet, King song, each of the three characters signifies how one might cope with being manipulated—especially by a loved one in the past.

Here’s what each persona means.

A true giver, the Poet is a person who’s been through traumas but is now helping other victims get over their fear of the abuser.

As the lyrics in the song suggest, words are the Poet’s weapon—with which they slay the city of haunting memories.

Also called the Ruler, the King fills the void their abuser left behind. Not only does the King overcomes trauma on their own, but they also show other victims of abuse how they’re supposed to be treated—like David’s boy, the chosen one, Jesus.

Equipped with the sword of self-love, the Soldier removes the abuser from their life. They are the warrior who fights their abuser no matter how excruciating.

Why Did the Quiz Went Viral on TikTok?

Soldier, Poet, King was a popular song in the TikTok Taverncore. But when users turned it into a personality test, it went viral again—this time, among trauma survivors who’d relate to the lyrics.

In an interview with Music Times, the song’s creators, Tyler and Maggie Heath, said that “the lyrics come from the idea of having a specific relationship that, as your eyes are being opened to the toxicity of it, you attempt to leave it for good.”

Take the Soldier Poet King Quiz (with a Catch!)

Just like the song, the Soldier Poet King Test has a biblical theme—with references to Jesus, God, and Devil. The catch is that, unlike most other quizzes, you might match the Devil himself, also known as the abuser.

In other words, you may realize that you’re a mean person who traumatizes others.

So, are you the Soldier, the Poet, the King, or the Devil? Hit the start button and find out with this brutally honest personality test.

Brenda is a certified life coach who tries to help couples improve their relationship by creating content and quizzes about love principles. She always reads about psychology and relationship dynamics. She has created more than 20 viral love quizzes for QuizExpo since 2019. Based on the user's feedback, most of her tests could help couples to improve their relationship. Brenda likes to explore new places and cultures. She is a big fan of yoga and meditation and regularly practices both to keep her mind and body in harmony.