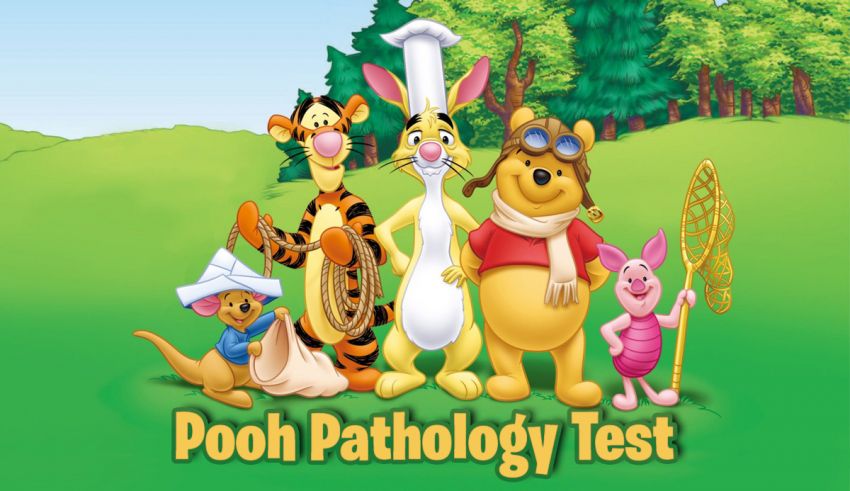 This 2021 updated Pooh pathology test tells you which character you are and what’s your disorder. This quiz is based on accurate psychologists’ analysis.

During the test, you answer 20 personality questions. The goal is to determine which Winne the Pooh character you are. After that, you’ll be (unofficially) diagnosed with the same condition as your cartoony counterpart. For instance, if you’re Piglet, you have General Anxiety Disorder.

Who did invent it?

A group of psychologists analyzed the Hundred Acre Wood’s story back in the 2000s. They created a list of syndromes and conditions each character has. However, they did not invent the Pooh pathology test. Some website’s used their research’s outcome to create the quizzes for users.

How does it work?

Psychologists inspect individuals’ traits and behaviors to diagnose them with a mental condition. That’s also how the Pooh personality quiz works. Your answers to the questions reveal your persona(s). And the algorithms identify your possible syndromes or illnesses.

Each Winnie the Pooh Character Is Diagnosed with a Disorder

Sarah E. Shea, Kevin Gordon, and their team detected 9 disorders after inspecting the AA. Milne’s story. They also categorized the illnesses and pointed out the symptoms for each individual. See below for a detailed explanation.

Pooh has OCD and Inattentive ADHD

“He has a tiny brain.” That line is enough to describe Pooh. He is obsessed with honey. And he becomes unthinking when it comes to finding more honey. Plus, Winne is obese and always forgets things. According to Dr. Shea and Gordon’s psychologist team, these are all symptoms of having Obsessive Compulsive Disorder and Inattentive ADHD.

Being fascinated by honey is a clear indication of OCD. Of course, loving sweeties is not a disorder. However, if you put your friends in danger to get more of them is abnormal.

You also see him getting distracted easily, according to AA. Milne, he is a forgetful teddy bear who loves daydreaming. That’s why the psychologist team diagnosed him with Inattentive ADHD as well.

Piglet is always shaking in fear. He is anxious, like, all the time. And according to the experts, “that is not normal. Piglet is suffering from GAD, which causes constant stress for no particular reason. We already know that Pooh’s best friend could not control his worries. So, were he to have a trial of low-dose tranquilizers, he could have a much peaceful life.

The poor donkey in AA. Milne’s stories are always sad, disappointed, and negative. Psychologists who studied his character believe that he has Dysthymic disorder. It is a severe condition that makes it hard for the patient to feel joy. Eeyore has a traumatic past. So, unsurprisingly, he is struggling with severe depression.

Mr. Long Ears should control everything in the Hundred Acre Wood. He claims to have lots of connections with other animals. And it seems like Rabbit is the main character of the story—if you believe whatever he says. However, the reality is different. He’s just another rabbit in the woods.

Psychologists suggest that Rabbit has a narcissistic personality. That means he acts as if he’s the most significant person in the world. He also shows signs of OCD because he’s obsessed with keeping things organized.

Throughout the story, we see this wise owl misreading things. He pronounces “skull” as “school.” And it seems like he has no idea how to read some words. That’s an obvious disorder, Dyslexia. People with this disorder have difficulty reading a text without making any mistakes.

You can describe Tigger using three words: overhyped, reckless, and uncontrollable. That is why he is diagnosed with Attention Deficit Hyperactivity Disorder. People like Tigger have difficulty focusing on one task/subject. Plus, they tend to be hazardously energetic.

Christopher seems to be the most normal person in the Hundred Acre Wood. But, hey, he’s talking to animals. Schizophrenia leads to hallucinations and other extreme conditions. So, because Robbin has lots of talking animal friends, it’s likely that he has schizophrenia.

Being overprotective is not a mental illness unless it becomes an obsession. However, Kanga is a single mother who loves her child, Roo. Most of the time, she is normal. But we see her feeding weird stuff to Roo and acting as a controlling mom here and there.

Roo Is Likely to Face a Disorder soon

Among all characters, Roo is the most innocent one. He is a curious kid who’s thirsty to learn more. However, he’s friends with Tigger. And his mom is overprotective. So, it’s highly likely that Roo will face some disorders as he grows up.

Winnie the Pooh Quiz Tells You Which Character You Are

By taking the Pooh Pathology Test, you have the chance to identify your (possible) mental disorder. You receive a detailed result at the end, explaining why you might have that particular illness/condition.

But Keep These in Mind

1. It’s Not a Clinical Diagnosis (Obviously)

Only a trained psychologist or psychiatrist can diagnose you with a condition. This page’s mental pathology test is not meant to offer any prescriptions, solutions, or definite verdict. It is a fun way to determine what type of character you are in the Hundred Acre Wood universe.

2. Everyone Is Abnormal in the Hundred Acre Wood (So, Do Not Panic)

All the main characters of the AA. Milne’s story are unusual. So, chances are high for you to end up with a condition like Dysthymic disorder. Do not let the results scare you. The Pooh Pathology Test is just for fun.

3. The Results Are Private

Do not worry about the outcome of the Winnie the Pooh Personality test. Your results on QuizExpo are entirely private. No one has access to the result page unless you want them to. That means you can share the result with whoever you desire.

Note: QuizExpo does not collect your data.

You Can Read the Original Pooh Pathology Research Here

If you wonder what is the Winnie the Pooh disorders table like, you should read the original paper. It’s called Pathology in the Hundred Acre Wood: a neurodevelopmental perspective on A.A. Milne. And you can have the PDF version for free.

Are You into Pathological Tests? Here’s What We Have for You

QuizExpo has hundreds of psychological quizzes. So, if you liked the Pooh Pathology Test, you might like the following quizzes as well: