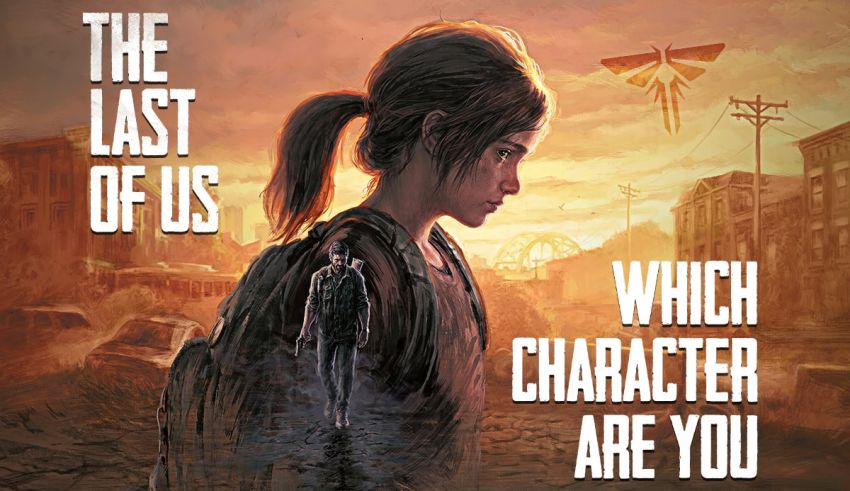 Which the Last of Us character in HBO’s TV adaptation are you? Joel, Ellie, Tommy, Marlene, or else? This TLOU quiz reveals the answers.

The Last of Us HBO Series Quiz

With twenty zombie apocalypse-inspired questions, the Last of Us quiz determines which character of HBO’s series you are.

HBO’s The Last of Us is an adaptation of Naughty Dog’s world-famous video game with the same title. It’s a new look into the story of Joel and Ellie, two strangers that form a father-daughter bond in a post-apocalyptic world.

With the TLOU personality quiz, you get to find out which of the 2023 show’s characters you represent in real life.

By the way, if you’re into video game TV adaptations, check out the Halo Character Quiz next.

Which TLOU TV Series Character Are You?

Despite being co-created by the original game’s director, Neil Drukmann, The Last of Us series introduces new characters—and changes some of the old ones.

But the question is, which one are you? Are you Pedro Pascal’s version of Joel, Bella Ramsey’s portrayal of Ellie, or else? Take the quiz to find the answer.

Find Your “The Last of Us” Match with MBTI

Winners of multiple narrative and script awards, the Last of Us video games are known for their compelling stories and memorable characters. And HBO’s adaptation comes with the same qualities: It has a powerful story about unforgettable characters.

But the more complex a TV show’s characters are, the more challenging it gets to find your perfect match—or counterpart—among them.

We solve that problem by adapting the characters’ MBTI types.

In other words, the TLOU quiz compares your personality type to that of the show’s main characters.

More HBO Quizzes: Which House of the Dragon Character Are You?

If you already know your MBTI type, use the following descriptions and table to discover your character.

As with his character in the game, Joel in HBO’s adaptation has the personality of a survivalist. He’s been traumatized by past events, desperately trying to fix his mistakes. But despite his tough façade, Joel is also kindhearted, protective, and fatherly.

Slightly different from her video game version, Ellie in HBO’s series is confused about her feelings. Her personality is parted between an angry teenage girl and an affection-seeking baby. In the new TV show, Ellie is spontaneous, careless, and stubborn.

A former military person, Tommy in HBO’s The Last of Us is an idealist clinging to his pre-apocalypse views. As an ex-soldier, Tommy is disciplined, strategic, and cautious. But he’s also a compassionate man, willing to help those in need.

A tough leader, Tess is a fearless woman who’s crossed all the lines to survive; she has nothing to lose. Personality-wise, the Tess we see in the TLOU TV show is more relatable and emotional. But she’s still a survivalist before anything else.

Despite being an antagonist in the game, Marlene in the HBO series has a humanized character. She’s the realist leader of the Fireflies who has firm ideologies about the post-zombie-apocalyptic world they live in. Personality-wise, Marlene is strong-minded, quick-thinking, and motivated.

Sarah in HBO’s 2023 adaptation plays a more significant role than in the original TLOU games. She is a caring girl who’s mature for her age and aware of the absurdity of their situation. But she still manages to keep calm and find ways to help others.

How Do the TV Show Characters Differ from the TLOU Games?

In an interview with Washington Post, Neil Drukmann—the show’s co-creator—said that the main difference between the characters in the video game and the HBO series is that they are more humanized in the TV adaptation.

Are you still wondering which HBO’s The Last of Us character you are? If yes, take this apocalyptic, zombie-smelling dark quiz to find out the answer.

With the following questions, you get to discover whether you are Joel, Ellie, Tommy, Tess, Sarah, Marlene, or else.

(Psst. Can you hear the clickers? They’re coming… Hurry up)

QuizExpo does not own the images in The Last of Us Character Quiz and intends no copyright infringement. HBO owns the said pictures.