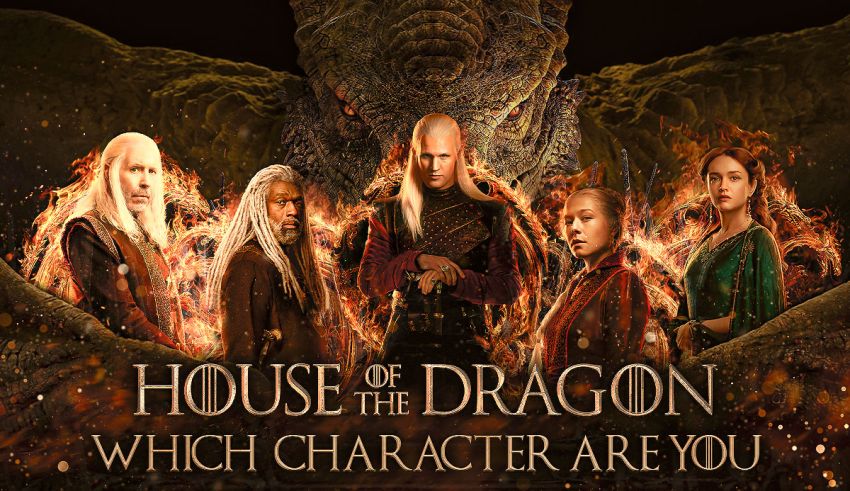 Hey, which House of the Dragon character are you? This Ice & Fire personality quiz reveals your perfect match in the HBO’s GoT prequel.

It’s a 20-question test that finds your matching House of the Dragon personality.

House of the Dragon is a Game of Thrones spin-off elaborating on the Targaryen family’s origin.

But the current quiz covers not only the Targaryens but also minor personalities.

Here’s what the test reveals.

Discover your counterpart in Westeros.

The premise is to answer your question: “Which House of the Dragon character am I?”

Your responses expose your traits. And the test compares them to that of the cast to calculate the similarity.

Find out which House you belong in.

House of the Dragon introduces only three major houses: Targaryen, Hightower, and Velaryon. By taking the quiz, you learn which one could be yours.

Unlike Harry Potter Houses, you cannot be sorted into a specific HOTD house. But the quiz analyzes your behavior to decide which one you could be a member of.

The House of the Dragon quiz unveils your personal mount, the dragon that you could’ve ridden if you lived in Westeros.

Dragons were rare creatures in GoT believed to be destroyed years ago. But they roam the lands in House of the Dragons, serving the Dragonriders.

This Test is Based on the Characters’ MBTI

Deciding which House of the Dragon character you are is not easy. But with the current MBTI-based test, you get an accurate assumption.

The following are the MBTI type of the main cast.

How to Know Which House of the Dragon Character You Are?

One way to find your match is by reading the HOTD character guides, the brief descriptions of the likes, dislikes, and traits of the Westerosi.

The following guides describe the prominent personalities in House of the Dragon.

Sharing the same ambition and bravery as Daenerys Targaryen, Rhaenyra is an intelligent, independent, and kindhearted girl.

Personality-wise, Alicent is caring, compassionate, and loyal. But she’s often confused about the right decision because she doesn’t want to disappoint any of her loved ones.

Although a peace-loving, giving king, Viserys is undependable. He cares too much for others’ opinions and is not as strong-minded as before his wife’s passing.

Daemon is a villain-ish character in House of the Dragon who is mischievous, aggressive, and vengeful. He’s on his way to becoming the heir to the throne—and will destroy anything or anyone blocking the path.

The Problem with HOTD Quizzes

The problem is that most House of the Dragon quizzes are interest oriented. In other words, they reveal which character you are merely based on your favorite color or food.

However, the test on this page focuses on your personality. Although your likes and dislikes affect the results, your ultimate match is determined by your traits and behaviors.

Ready to Uncover Your Ice & Fire Self?

Look no further to find out which House of the Dragon character you are. The answer is already in your hand.

All to do is take this entertaining quiz inspired by George R. R. Martin’s Ice & Fire and HBO’s 2022 show.

QuizExpo does not own any images in the House of the Dragon character quiz and intends no copyright infringement. HBO owns all the said pictures.