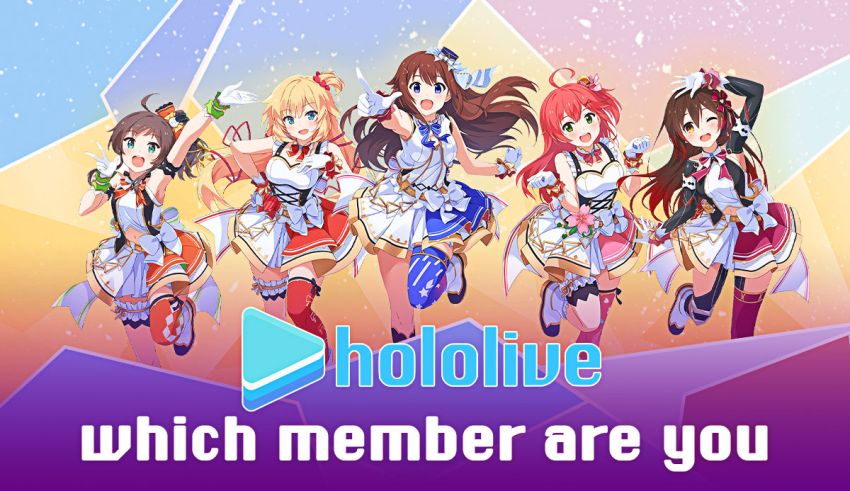 Do you wonder which Hololive member you are? This VTuber quiz asks you 20 questions to find your match. Are you Gawr Gura, Oozora Subaru, Mori, or else?

It’s a series of personality questions that help discover the virtual YouTuber you represent in real life. The quiz considers all the crucial factors, such as your interests, skills, and even voice.

If you’re into virtual reality quizzes, check out our Vocaloid Test as well. It discovers which VOC you are by analyzing your persona and traits.

Find out which VTuber you are.

The test’s premise is to answer a question like, “Which Hololive YouTuber am I?” We have created a database of the top characters’ profiles. And we will use your responses to compare your actual personality with theirs.

Get a free personality analysis.

By taking the test, you enable us to break down your personality. So, your results will also explain why you matched a particular VTuber and what it means.

See which virtual YouTuber could be your bestie.

A perk of taking the Hololive member quiz is meeting your virtual best friend. You might wonder which streamer or VTuber is similar to you. But let you know which other famous members could’ve been your besties had you been a part of the VR creators.

Don’t you want to know what would make your Hololive alter-ego special? The quiz helps you figure that out by offering a list of skills, powers, and talents you could’ve had as a virtual streamer or YouTuber.

What Is a Hololive Member?

How to Know Which VTuber You Are

There are different ways of discovering your match in the Hololive universe—the best one being an online personality quiz. One alternative is reading the character description of each VTuber, and deciding which one you represent in real life. (Though it’s not an accurate method).

Here are brief persona breakdowns of some famous Hololive members to help you with that.

With nearly 4 million YT subscribers, Gura is the most popular VTuber ever to exist. She is silly and clumsy. But her clever, witty side makes people fall in love with her quickly. Gura is famous for being terrible at math and other comparable complicated topics. And one of her fans famously called her a girl with a heart of gold and a head of the bone.’ But she’s a shark enthusiast who would leave a smile on your face no matter what.

Individuals who match Gura in the quiz are sociable and extroverted. But they might struggle with forming romantic relationships due to being shy around their crush.

If you ask the fans, “Which Hololive member are you?” most of them would pick Subaru. She’s a cute and attractive tomboy who might let a couple of R-rated jokes slip in her streams. People love her because she’s confident, funny, and optimistic. Subaru is also praised for her gaming skills—and many gamers have a hard crush on her.

People who share the same personality are daring, bold, and hardworking. They are often described as goal-oriented and reliable persons.

Her collection of scary weapons has made her a fan favorite. Mori raps and reaps at the same time. She’s one of the most talented virtual YouTubers in the whole world—and definitely one of the beloved Hololive members. However, she is also a ridiculously forgetful girl, constantly misplacing things and looking for them.

Matching Mori Calliope in the quiz indicates that you’re a serious and determined person. You’d rather be praised and complimented because of your achievements than your appearance. And you don’t like to express your affection for someone directly. (Your Dere is Tsundere, for sure).

Being the most cheerful member of Hololive, Fubuki is just adorable. She is almost always excited and energetic, which lifts her viewers’ mood. However, Fubuki has shown some strangely twisted sides of her character in her streams, making people wonder what’s going on in her head.

Participants who get Shirakami in their results are shy and sweet. But they might also have a hidden dark side.

According to Virtual YouTuber Fandom, there are over 60 active Hololive talents on social media and streaming apps. So, it’s not going to be easy for you to find your perfect match. So, we’d recommend taking our accurate persona quiz instead of going manual. We can expose your virtual counterpart in less than 5 minutes and provide you with extra fun pieces of information.

The Nijisanji VTubers Are Included in the Test

The good news is that the quiz is not limited to the Hololive members. We have added the profiles of well-known virtual creators from the competing company: Nijisanji. So, you might end up matching characters like Vox Akuma or Fulgar Void, whose popularity has been on the rise lately.

Why People Ask Things Like, “Which Hololive Member Are You?”

The Hololive fandom is huge, and it’s growing every day. Personality matches help the community members to get to know each other faster and break the ice when chatting. Most fans want to know which Hololive or Nijisanji member you are because it gives them an idea of what kind of person you are. And it makes it easier for them to relate to you.

This Is the Best Way to Enter the Universe and Fandom

Taking the member quiz can be a booster if you’re new to the VTubers and Hololive universe. It helps you find your match. Plus, it gives you an idea of what each member’s personality is like, so you’d have something to say when diehard fans approach you.

QuizExpo does not own any of the images used in the ‘Hololive member quiz.’ COVER Corporation owns all the said pictures—and no copyright infringement is intended. Please, contact us for any issues or concerns.