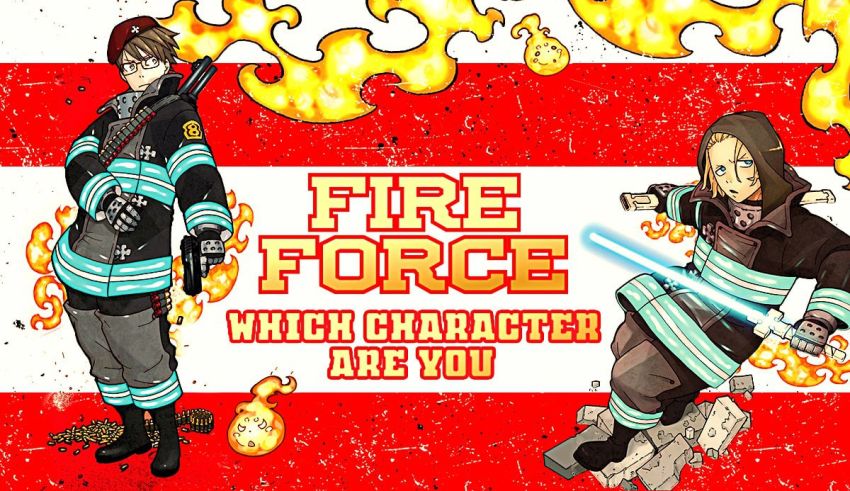 This anime quiz reveals which Fire Force character you are. Are you Shinra Kusakabe, Arthur Boyle, Tamaki, or else?

The Fire Force Quiz That Reveals Your Character

With its 20 personality questions, the Fire Force quiz compares your traits with the main characters to discover similar ones. It also replicates the anime’s lore, enabling you to alter your fate as a Special Fire Force Soldier.

Created by Atsushi Ohkubo, Fire Force is a manga series about an organization of pyrokinetic people fighting Infernals—hellish creatures wanting to destroy the world. It takes place in the same universe as Soul Eater, and many consider it a prequel to that show.

The current test reveals the character in Fire Force you resemble in real life.

For a more comprehensive match, take “What Anime Character Are You?”

How to Know Which Special Fire Force Member You Are

One way to find your lookalike—or counterpart—in the Fire Force lore is by getting to know the main characters. Simply read the character descriptions and see which one you relate to.

Use the following guides to determine your match quickly.

A true hero, Shinra is a pyrokinetic boy wanting to make the world a better place. His personality type is ISFP, meaning he’s brave, intelligent, and confident—with a strong sense of right and wrong.

Despite his distant and blunt façade, Arthur is a caring friend. His personality can be described as stubborn, unruly, and combative. But deep inside, Arthur is an ENTP—a friendly boy desperate to impress others.

Known for her Lucky Lewd Syndrome, Tamaki is an ENFP. She’s nice, bubbly, and loud. But she also struggles with insecurity about her body and looks. As the Fire Force arc progresses, Tamaki becomes more of a Tsundere—an emotionally unstable girl around her crush, Shinra.

Suggested: Find out what Dere you are with a fun quiz.

Initially a deceptive girl, Hibana is a complex character. She is narcissistic on the outside and compassionate on the inside. As an ENTJ, Hibana is competitive, focused, and highly motivated. But she’s also quite sassy and lewd.

An experienced master, Benimaru is a traditionalist. He apricates peace of mind and hates anything that disrupts it. As an ISTP, Benimaru is also a short-tempered loner who’s quite outspoken—to the point that some may consider him rude.

Find Your Enen no Shouboutai Character with an MBTI Test

While your comfort character or the character you kin shares a few characteristics as you, it’s not your counterpart. Your perfect match is actually the person with the same—or the closest—personality type as you.

To identify your replica in Fire Force, the quiz utilizes an MBTI database. In other words, it detects your personality type, compares it to that of the anime’s characters, and declares the most similar one(s).

If you already know your MBTI type, use the following table to see which Fire Force character you are.

Meet Your Fire Force Crush, too

Do you happen to ask yourself, “Who is my Fire Force boyfriend or girlfriend?” If yes, the time has come to know the answer. This character quiz uses your responses to uncover the boy or girl you’d have a crush on.

Ready for an Adolla-Inspired Quiz?

Your Fire Force character is waving on the other side of the quiz. Hit the start button, respond to twenty amusing Otaku-level questions, and meet them.

QuizExpo does not own the images in the Fire Force character quiz and intends no copyright infringement. Funimation and David Production own the rights to the pictures.

“Otakus for life.” That’s Ryo’s not-quite-official tagline. A 20-some-year-old anime freak, Ryo oversees most anime quizzes on QuizExpo. But you can find him re-reading his favorite manga and catching up on the latest anime releases. When we asked, “Why do you love making personality quizzes?” Ryo’s response was phenomenal: “I love deciding people’s fate. It makes me feel godlike.” (We know he was just joking, though.)