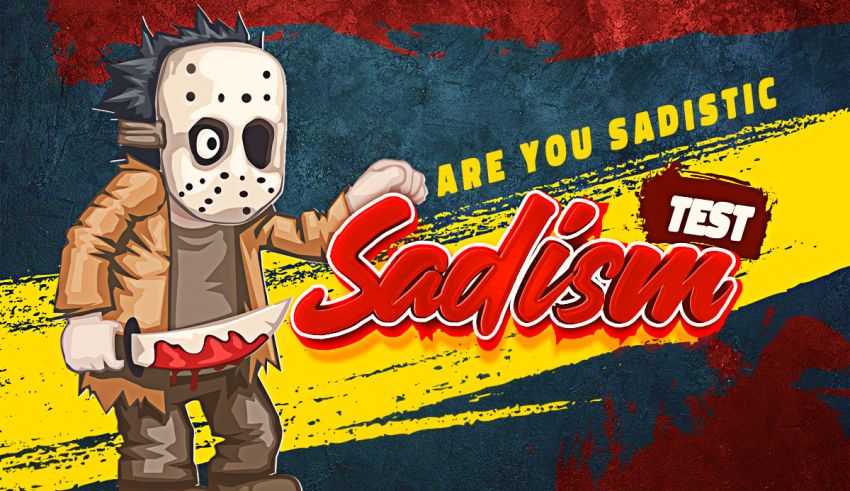 The Sadism Test reveals if you enjoy inflicting pain on others. Are you a cruel person who likes violence? Find out if you are sadistic with 20 simple questions

What Is a Sadism Test?

A Sadism Test also referred to as the VAST test, is a series of personality questions assessing your dark core to expose the lack of empathy in the participants. You’ll score high in a Sadism Test in the event of experiencing pleasure, excitement, or satisfaction from antagonistic behaviors.

It identifies individuals with a tendency to engage in demeaning, cruel behaviors with the purpose of feeling joy or asserting dominance.

Note that it’s not to be confused with the sociopath test because the conditions are different—despite the comorbidity.

How Does It Work?

It works based on the dark triad principle, including narcissism, Machiavellianism, and psychopathy. You should answer questions that expose how mean you are to others—and how you feel about it.

This Sadism Test Is Based on Theodore Millon’s Work

Dr. Theodore Millon, an American psychologist, known for his work on personality disorders, believed that there are four types of sadisms: Enforcing, Explosive, Spineless, and Tyrannical.

The Sadism Test uses his findings and theories to generate accurate results and reliable analysis.

Find Out if You Are Sadist, Masochist, Sadomasochist, or Psychopath

The comorbidity and overlap between several disorders make it difficult to say if a person is sadistic. You have to roll out other possibilities, such as masochism—a pattern of self-defeating or self-harming behaviors.

To finetune the results, the Sadism Test evaluates you for all the overlapping conditions. So, by the end, you’ll find out if it’s actually a tendency to be violent, a fascination with pain, a passion for being dominant, or maybe even all.

Another example of sadism is intolerance for independence. A sadist would go out of their way to keep others insecure, unconfident, and dependent.

The test uses Dr. Millon’s theory to sort you into one of the sadism categories, only if you are a sadistic person. Here’s what to know about each type.

#1. Enforcing Sadism happens when the terror is in the public interest. Police brutality could be an example of enforcing sadistic behavior because it’s portrayed as a necessary action to protect the innocent.

#2. Explosive Sadism is unpredictable and sudden bursts into harmful, aggressive, and violent behavior. A person with such SP (i.e., an explosive sadistic personality) might seem normal when calm. But they would become cruel when irritated.

#3. Spineless Sadism is when a person dominates a weak individual—also referred to as a scapegoat.

#4. Tyrannical Sadism is a tendency to force others to submit through brutality.

The Test Reveals the Kind of Pain You Enjoy Most

To answer questions like, “Am I a sadist?” it’s crucial to review your views on agony. Many individuals fantasize about sexual pain, others enjoy psychological misery, and some prefer physical torment.

However, the good thing is that the sadism quiz exposes which group you belong to.

Emotional sadism is the most common type of SP. It’s when a person deliberately causes psychological agony in others or uses emotional abuse as a means of having fun.

A person with a sadistic personality might be fascinated by the act of violence, trying to choke, slap, punch, cut, or even shoot others.

In some cases, the person with a sadistic personality doesn’t engage in any violent activity. However, they enjoy watching it when performed by others. So, they might obsess over things like snuff films.

Why Someone Becomes Sadistic?

Although the actual reason is unclear, it’s believed that sadism is caused by operant conditioning, meaning that you learn to replicate it. In other words, it’s caused by the environmental factors and the life experiences of a person.

Read Before Taking the Sadism Test

The questionnaire is designed to answer questions like, “Are you sadistic?” And it does a good job distinguishing overlapping conditions such as masochism, psychopathy, or sadomasochism. However, there are a couple of things you should know before taking it.

It is not a clinical diagnosis.

As of DSM-4, sadism is no longer considered a personality disorder due to its comorbidity. So, only a clinical test can determine if you are sadistic or not. Please, do not replace the online versions (like the one on this page) with an actual medical evaluation.

You should not ignore the results.

Although not a diagnosis, the Sadism Test results are still important. Scoring high indicates you are likely to experience pleasure by hurting others or yourself, which should not be ignored. You might want to discuss the results with a psychologist or a trained therapist and seek professional help.

Call the National Domestic Violence Hotline if you’re a victim.

If you are a victim of a sadistic person’s actions, please call 1.800.799.SAFE (7233). It’s a safe hotline that provides 24/7 support for people like you. Visit thehotline.org for more info.

QuizExpo is not associated with any of the names mentioned in the Sadism Test.