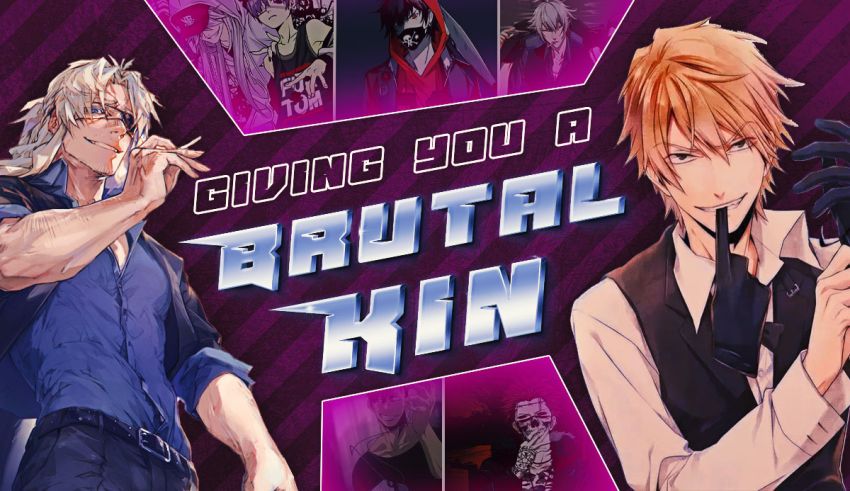 We’re giving you a brutal kin based on your personality. This ruthless quiz doesn’t care how nice you act to others. And it finds your inhumane match regardless

Beware: This Quiz Will Give You a Brutal Kin

The test is a set of 20 messed-up questions, assigning you to a brutal anime character. But it’s unique in that it has a storyline. You have to complete the manga-like story to find out which f-ed-up personality is your relative.

Using the quiz, you can:

The Most Brutal Personality Quiz with Messed-Up Results

We have handpicked the craziest characters of all time to create a psychopath-level questionnaire. Some of the results are so freaky that you might want to unsee them right away.

If the test sounds too brutal, try taking the Anime Stereotype Test. It’s less freaky and will not cause emotional damage.

But if you dare to participate, please, take the results lightly—because you will not enjoy them.

The fact that we’re giving you a brutal kin might catch you off-guard. But few people are actually ready to face their dark core.

It might sound fun to ask, “Who’s my brutal kin?” But you have to be prepared for the worst.

Taking the quiz encourages confronting your inner monster. It doesn’t care about your social masks and fake attitude. It exposes the darkness in you ruthlessly.

How Does the Kin Assignment Quiz Work?

Brutal personality quizzes often work based on your preferences. So, the more f-ed up choices you make, the freakier results you receive. But we have created the first genuine questionnaire to assess your evilness without forcing you to make irrational choices.

Here is how it works:

It analyzes your Dark Triad without you noticing.

How narcissistic, deceitful, and psychopathic are you? That’s a question we answer based on your choices. In fact, you’re being watched throughout the process and the algorithm picks up on the slightest negativity in your personality.

It looks for anime characters that are as brutal as you.

We’re giving you a brutal kin with an anime-inspired quiz. It’s because manga and Japanese animations are the #1 resource for messed-up people. Think JoJo’s Bizarre Adventure’s characters.

Once we have your dark side profile, we match it to the database of the most inhumane personalities. And we reveal your perfect counterpart in no time.

Examples of Brutal Kins Some People Got in the Test

Why they are brutal, you might ask. Well, there are fairly good reasons.

Disguised in a child’s appearance, Johan from Monster anime is the incarnation of the devil. He forced his classmates and teachers to fight to the death and set his school to fire.

No one really knew how brutal an anime Dere could be before Gasai’s story. She’s the scariest yandere who might kidnap, torture, amputate, and murder anyone interested in her boyfriend.

Another child monster of the anime world, Hibana is a master of brutality. She tortures and kills others as if she were born to do so.

How to Kin Assign a Person

You need to know how arrogant, careless, and crazy a person is to assign a brutal kin to them.

One way to do so is by putting them in fictional scenarios, and asking them to make controversial decisions. People are more likely to reveal their cruel aspects when they are not afraid of the consequences. So, by creating an imaginary environment (Similar to that of a personality quiz), you can kin assign any person.

The Problem with Other Brutal Kin Quizzes

Inaccuracy is what most brutal kin assignment tests suffer from. They are created by random people and don’t consider your actual personality when matching you to weird characters.

You may never understand why a specific brutality quiz thinks you look like a particular personality.

But we’re here to put an end to that. The test you’re about to take explains why you matched a character and how you should interpret the results. Plus, it’s overly accurate since it works based on your Dark Triad.

What’s the Point of Giving You a Brutal Kin?

The point is to identify what kind of messed-up background you could have had if you were an anime character. You may also use the brutal kin quiz to determine if you are a mean person.

But if you dig deeper, the only point is having fun. It’s an entertaining way to overview your persona type and get to know your less-pleasant sides better.

Analyze Your Personality to Meet Your F-ed Up Anime Kin

Start the quiz if you are ready to receive your brutal kin. But again, beware it’s not going to be a sympathetic process. So, take it at your own risk.

By the way, don’t take the results too seriously. It’s only supposed to be an entertaining quiz. So, no hard feelings, please.

QuizExpo does not own any of the images used in the Brutal Kin Quiz. No copyright infringement is intended. Please, get in touch with us if you have a removal request.