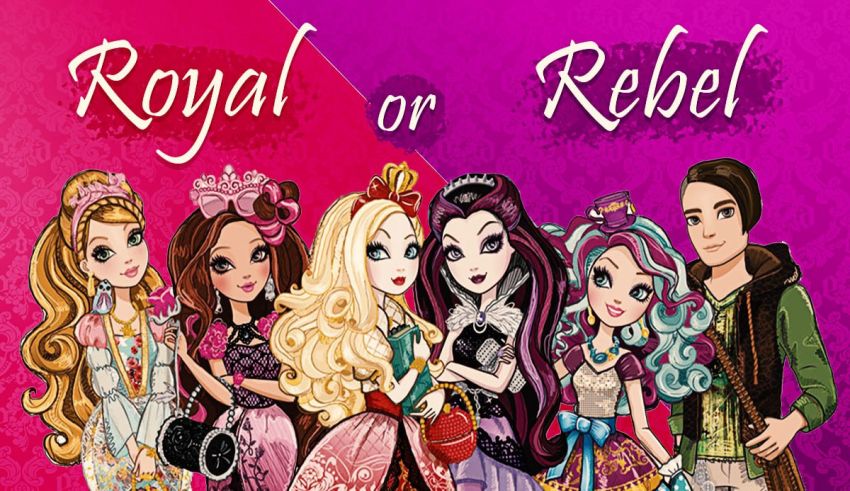 This fun quiz will help you find out if you are a Royal or a Rebel or a Neutral in Ever After High. Just answer 20 simple questions to find out.

TV series in the past did not have the ability to create a huge fandom. Still, these days it seems that it has become a routine that with the release of each series, we get used to the characters and groups of these series and want to put ourselves in the shoes of one of them. You only have to look at one of the recent prime-time series, like Wednesday, to see what I’m talking about.

Animations are taking over

Of course, it is not only high-quality, and high-budget series that know this ability; some animations also do this well. For example, take a look at Rick and Morty or The Family Guys, which have managed to find their place in the hearts of the audience, and each character in these animated series has its own charm.

One of the series that has been able to have a special place among the audience is the animated series Ever After High. If you want to know more about this series and take quizzes about it, I recommend that you go to the Ever After High quiz.

In this quiz, we are going to go into this animated series in a little more detail and tell you which of the Factions you are.

Are you a Rebel or a Royal? Maybe you are a Roybal! What does anyone know Stay tuned for the continuation of this quiz.

Who are the Rebels?

In the world of Ever After High, there is a group of students known as Rebels. There are examples of these students in the real world, and maybe you yourself are one of the Rebels. This issue is completely related to your lifestyle and, of course, the decisions you make for yourself and your future.

The Rebel group are students who decide to make their own future and decide their own destiny. The leader of the Rebel group is Queen Raven. He believes that these students should not go through the destiny that has been written for them, and they should write a new destiny for themselves in any way they like.

One of the most important supporters of this group is Giles Grimm, who, of course, is imprisoned in the prison of the Royals group. The Rebels have a purple heart symbol that symbolizes following your heart’s desires.

Who are the Royals?

I think it’s easier to guess what the Royal Front students are like now. The students of Ever After High who are not interested in changing their fate and believe that the predetermined destiny should be followed are known as the Royals.

The interesting thing is that some Royals students have a very bad fate in their future, but still, they have decided to follow this fate forever, and there is no change in it. A subject that we may have faced many times in the real world.

The leader of this group is called Apple White, who strangely has a very close friendship with Raven Queen. Of course, some of the Royals students sometimes decide to leave the group and join the Rebels, which makes for an interesting storyline throughout the animated series.

There is another group of students who are a combination of the two parties we talked about earlier. This group of students has generally accepted their fate, but they have decided to change some of the events in their lives so that the Legacy they leave behind will be different.

The head of this group is Poppy O’Hair, who, for the first time, was the one who came to the conclusion that although one should surrender to fate, it is not necessary to leave all parts of life to fate.

Which one are you, a Royal or a Rebel?

Now it’s time to answer the main question. Are you a member of the Royals or the Rebels? Maybe you are a combination of both and fall into the Roybels group. By answering 20 questions in this quiz, you can reach the final answer. Stick around for Ever After High quiz.