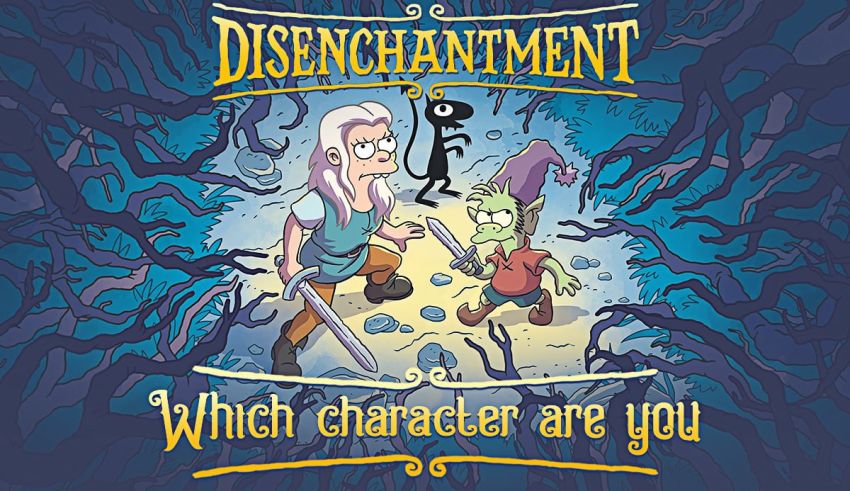 This quiz will reveal which Disenchantment character you are. Answer 20 personality questions to find out if you are Queen Bean, Elfo, Jasper, or else.

Animated TV series is getting bigger every year. There was a time that only a few creators went for it and made the animations. There were shows like The Simpsons, South Park, and Family Guy, and that was it.

But recent years are considered a big couple of years for animated series, and there were a lot of big names like Rick and Morty, Gravity Falls, Solar Opposites, and even Bojack Horseman. Also, there was a lot of animated series that didn’t get attention as they were airing.

One of these underrated animated series was Disenchantment which had a great idea and content behind it. But recently, this show has been getting some recognition. And the show is called Disenchantment; let’s talk about it a little.

Going Medieval, which Disenchantment character are you?

Disenchantment is set in a fictional world with medieval European elements and tells a story of a kingdom called Dreamland. The main story is based on Bean, the princess of this imaginary world.

But Bean is not your typical princess and has a lot of issues. Although she is an adventurous person, she is a big alcoholic and has a rebellious side that is not suitable for a princess, which makes the series so funny.

There are other characters in the show.

Elfo and Eric Andre are also in this adventure with Bean and are so sweet, just like Bean.

The start of this project and pre-production kicked off in 2017, and the creators had big hopes for this series. The creator of Disenchantment is Matt Groening, and if you don’t know who he is, you should see this genius creates that big animated series like The Simpsons and Futurama.

As it is an easy guess, the series was ordered by Netflix. This network got the idea of how big animated series can be after their big names like Bojack Horseman, and they wanted to expand on their journey to better and more controversial series.

The writing team is filled with many talents; weirdly enough, there is also a famous rapper in the writing crew. The rapper Briggs is in it, and he described the show as a crossover between The Simpsons and Game of Thrones, and that’s pretty much what the show is.

When the series aired for the first time, people had mixed feelings about it. Some critics liked the comedy the series represented, and others didn’t like how the show went. It got 62 in rotten tomatoes and considered.

But Netflix really enjoyed the show, and it got a bunch of viewers for the network, and it didn’t take long for them to order another 20 episodes. Another 20 episodes of the series aired in 2020, and it was a great success. The show got better in the second part.

That’s why it comes as no shocker that Netflix wanted more of this series, and it was about time that we saw the third part or season 3 come out, and we’re closer to the third part than ever.

Season 2 had more storytelling elements to it, and they tried to make the world of the series more relevant, which is where the show rose. The second season could be weaker than season 1, but the writing crew did a hell of a job writing the script for the second season.

Let’s get ready to RUMBLE!

Good luck with the quiz, and have fun, fam.