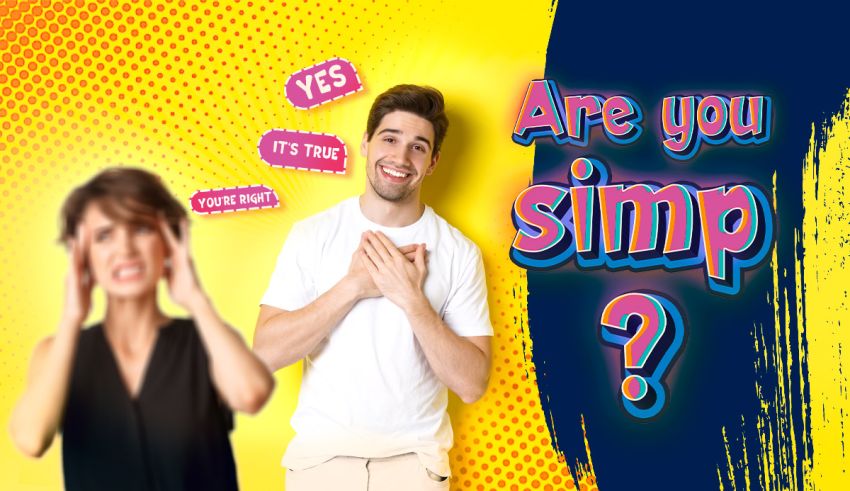 Do you ask yourself, Am I a simp? This quiz analyzes how you treat women to discover if you are a simp. Answer 20 questions to reveal your true personality.

Are You a Simp? Signs You Are a Simp

If you become submissive to a woman, ruin your self-esteem or do too much to gain her attention, idolize her appearance, and pretend to be nice only to have sex with her, you are a simp—also known as a white knight.

A Quiz That Hurts: Who’s the Real Simp?

The simp calculator on this page is a genuine questionnaire that identifies simping in your relationships. It can accurately distinguish niceness from fake submissiveness used to get laid.

It can help guys who ask themselves, “Am I a loser?” to get a solid, reliable answer.

Find out if you’re a Sucker Idolizing Mediocre Pu***.

The test’s premise is to help expose real simps: Guys who idolize women and become submissive to them with hopes of sleeping with them. It’s not the same as a hopeless romantic or one whose love language is the idolization of a partner. The quiz looks for a specific type of male who does extra cringy and nasty things just to sleep with a female target.

Analyze your behavior around women.

How you treat ladies is key to deciphering your simpness level. Of course, you can give dishonest answers in hopes of dodging the true answer. But lying is also one of the fundamental features of being a simp—so, there’s no escape.

Most simp quizzes are toxic themselves. They make any nice guy look like a loser. However, we have created a 100% accurate, honest, and non-toxic test. It can discover the simp nation citizens without misjudging your genuinely nice behavior to females.

Things That the ‘Am I a Simp Quiz’ Considers

To finetune the results, the questionnaire looks into three main areas: Your intents, behaviors, and memories.

A simp’s goal is to get laid, no matter what. So, that’s what we’re looking to find out about you. Of course, there are not going to be any direct questions. So, you never know which one of your responses will reveal your dirty or authentic intention.

It’s easy to hide simpism in your speech. But can you cover up your actions? We don’t think so. We do our best to see the tiniest details in how you behave around women to answer the big question, “Are you a simp?”

Sometimes, you don’t even know if you’re a white knight. That might be why you’re self-questioning, “Am I simp?” right now. So, we ask you questions about your memories to help uncover your actual personality.

Types of Simps that the Quiz Reveals

Yes, there are different types of simps out there. Some use the nice guy strategy to get laid. Others try to seem like a submissive baby boy in hopes of some more attention. But the cool thing is that our quiz can expose your type—if you belong to a specific simp nation.

The most common simp type is the fake nice guy. He would try to seem like the kindest and gentlest man ever. But deep inside, he’s waiting for the intercourse to happen so he can reveal his true nasty face.

With the rise of influencers, TikTokers, and even female anime characters, a new group of simps has emerged: the idolizers. They are the ones who create a goddess-like idea of a girl in their head without actually getting to know her. Being sexy is enough for an idolizer to see you as the most precious human being on earth. And the sad part is that they often simp over fictional or super-famous people who’re unreachable—and out of their league.

We have already created a sigma male test to expose the personality type. But you should know that acting like a lone wolf is sometimes a simping method. Some guys are so afraid of being rejected or called a simp that they transform their anger into talking sh** to women and treating them poorly. But guess what? That doesn’t hide the fact that deep inside, they’re dying to get laid.

You might be looking for an ‘Am I a simp or pimp quiz.’ In that case, you’re on the right page. We do expose the pimps, too. This category belongs to guys who simp over others in hopes of getting their friends laid. (It’s a complicated situation).

There are even more types of simping techniques and types. So, if you want to ensure you don’t belong to any of the categories, all you have to do is take the test. Would you dare to risk your manhood and honor to see the results? Or would you rather call yourself “an alpha” and run away from being examined?

The Toxic Culture of Anti-Simping on Social Media

Yes, we literarily created a test to answer questions like, “Am I simp?” But that doesn’t stop us from talking about the toxic culture around the topic. It’s not good to ruin your self-esteem to sleep with some girl. But the way the internet is using the word ‘SIMP’ is way more controversial than that.

Nowadays, some guys are afraid to treat women nicely because they don’t want white knights. Even TikToks call men simp because of NOT WANTING TWO BIT***.

So, we want you to know that that’s not the case with our quiz. Here, you’re rewarded for being a genuinely kind, considerate, and polite man.

Are You a Simp for Being Nice to a Woman?

No. Treating a woman with love and respect does not make you a simp. It’s also a myth that girls don’t like nice guys because their behavior is considered simping. One of the signs of being an actual simp is treating women poorly after getting laid with them and gaining what you wanted.

Disclaimer: Read Before the Test

The quiz on this page is designed to answer questions like ‘Am I a Simp?’ playfully and genuinely. Please, take the results lightly, and do not use them to humiliate or emotionally abuse other guys. You can always contact us if you find any of the questions or results offensive or inappropriate—and we’ll take care of your reports ASAP.