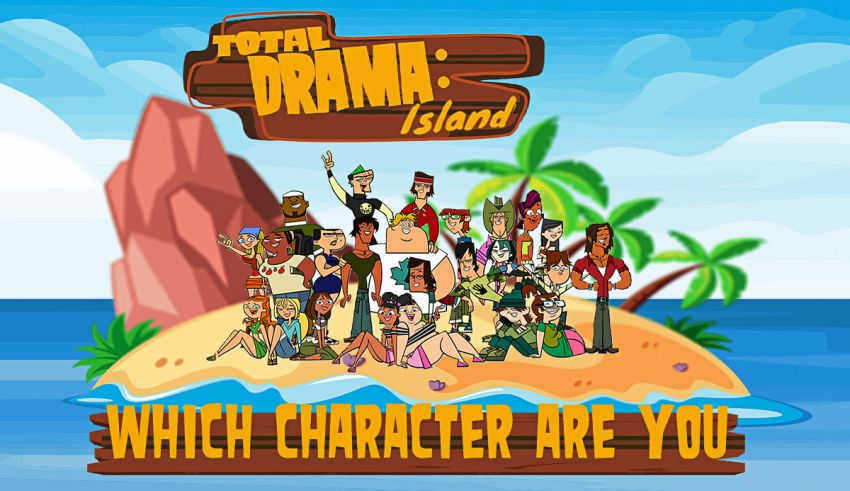 Do you wonder which Total Drama Island character you are? Take this TDI personality test to find out the answer. Are you Gwen, Owen, Duncan, or else?

It’s a 20-question test to reveal which Total Drama contestant is similar to you.

Total Drama is an animated parody of famous reality shows like Survivor. It follows the story of 22 teenage contestants competing to win the grand prize.

The quiz examines your persona, compares it to the show’s characters, and suggests a perfect match.

Responding to the questions allows us to identify your personality type and create your profile. We then go through our database to uncover the contestant with the highest similarity percentage.

The following table shows the MBTI type of the most popular characters. (Use it if you want to take matters into your own hands).

Are You Team Screaming Frog or Killer Bass?

Hardcore fans often root for one of the two competing teams in Total Drama Island: Screaming Gophers or Killer Bass.

But to add a bit of extra fun to the quiz, we will put you in one of the groups based on your responses.

So, not only will you find out who your Total Drama match is, but you’ll also discover which team you’d compete in. How cool is that?

How to Know Which Total Drama Island Character You Are

TDI characters might not be as complicated as other animated shows like Adventure Time. Still, it’s not that easy to analyze their personality and match them to your own.

If you’re not a fan of online quizzes, the next best way to meet your Camp Wawanakwa soulmate is by reading the characters’ descriptions.

The official Total Drama fandom offers dozens of personality breakdowns that come in handy. But here are brief analyses of the top five characters—in case you’re too lazy to check theirs out.

Although gloomy and lonesome, Gwen is a kindhearted, considerate, and giving girl. A sharp Total Drama Island contestant, she’s also quite artistic and passionate about astronomy.

Personality-wise, Owen is cheerful, easygoing, and lovable. And many consider him the most popular character in Camp Wawanakwa. His iconic traits, though, are eating and, well, farting.

A stereotypical Hollywood bad boy, Duncan is sarcastic, despicable, and dark. But that’s not his true persona. Despite his naughty-ish attitude, Duncan is a caring and protective guy.

Chris, Total Drama’s host, is a narcissistic, selfish, and psychopathic character. He enjoys it when there’s actual teenage drama going on in the camp and contestants fight.

Despite being an intelligent young lady, Heather puts her genius into evil. She becomes a manipulator who cares about nothing but winning the competition. Still, she remains one of the most beloved TDI characters to this day.

The TDI quiz is more than a tool to decide which character you are. It’s a journey to revisit your memories of the show and put yourself in the contestants’ shoes.

All the twenty questions are inspired by the Camp Wawanakwa events, including the contests, vote-offs, friendships, and relationships.

Tap the start button to see if you’d walk on the Duck of Shame early or you’d actually become a finalist and compete for the grand prize.

QuizExpo does not own any images in the Total Drama Island quiz and intends no copyright infringement. Fresh TV, Elliott Animation, and Cake Entertainment own the said pictures.