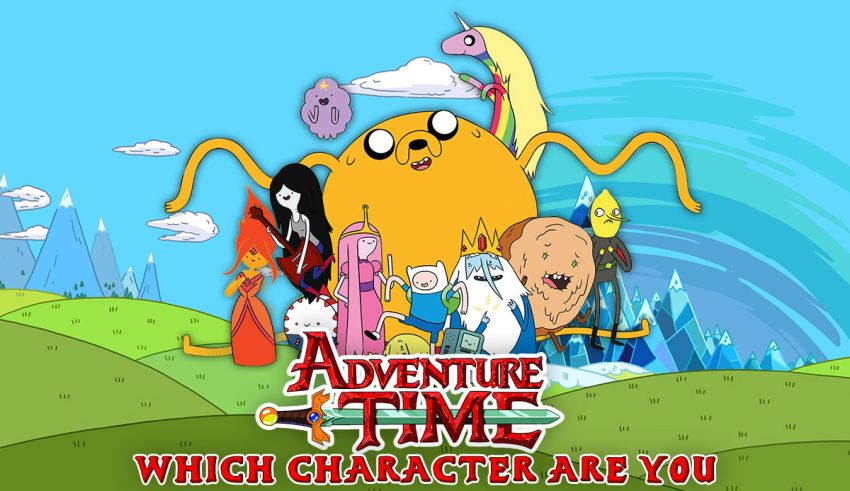 This quiz has an accurate answer to the question which Adventure Time character are you? It matches you to Finn, Jake, Marceline, Princess Bubblegum, or others.

Watching a crazy show like Adventure Time might make you go, “How would I look like in such a weird world?” And that’s why the quiz on this page exists. It’s specifically designed for fans and viewers who wonder which character is similar to them.

We have already created several TV & movies quizzes. But this one is unique thanks to the strange and mind-bending plot of Adventure Time. We did our best to keep the questions as hilariously unbelievable as the show’s episodes.

But if you’re interested in cartoon personality tests, you should also check out our BoJack Horseman Character Quiz, which is as entertaining as the one you’re about to take.

The premise of the Adventure Time personality quiz is to match your personality to that of the show’s main characters. So, the big question is, “Which of the Land of Ooo creatures do you represent in real life?” To do so, we have already created detailed profiles of all the famous adventurers. And your responses will help us figure out your perfect match in no time.

Discover your best friend in the Land of Ooo.

Most participants are like, “I want to know what I as an Adventure Time character could look like?” The good news is that you get the answer by taking the quiz. However, that’s not all we offer. One of the perks of participating is finding out what other character could become your bestie. Not only will we match your profile to that of the adventurers, but we will also look for the best candidates for becoming your #1 companion.

See what species you belong to.

Fans already know how complicated the universe of Adventure Time is. You come across many strange species like Elementals, Candy People, Pubs, MOs, and even vampires. However, a cool feature of the quiz allows you to discover what species you’d belong to if you and the actual character of the show. (This has never been done before, and we’ll use your profile to determine the species).

And get your personality analyzed.

There’s a lot to reveal about a person who asks, “Which Adventure Time character am I?” That’s why our quiz results include a brief (but profound) breakdown of your persona. The goal is to explain why you matched a specific adventurer and what it means.

How to Know Which Adventure Time Character You Are

Taking a genuine online quiz is the best method. But not all fans would like to do that. So, here’s the alternative way, which requires lots of effort. If you want to find your perfect Adventure Time match, you need to read the character description of the protagonists. You have to know what each character’s personality is like before deciding which one you relate to most.

The following descriptions might come in handy if you want to go manual and find your match independently.

As the show’s protagonist, Finn is everything you want to see from a hero. His strong sense of right and wrong turns him into a genuinely lovable and trustworthy boy. But he’s rather simple-minded and might be impulsive at times. Finn’s character gradually develops, becoming less of an idealist as the story progresses.

If you ask the fans, “Which Adventure Time character are you?” many would pick Finn over others. That’s because he’s brave, nice, selfless, and relatable.

Despite being too laid-back for being a dog, Jake is a true friend. He’s always there for Finn and never hesitates to offer reliable pieces of advice to him—although sometimes, he just talks nonsense. Jake has weird habits like writing backward (probably because he has dyslexia) or making inappropriate jokes at the wrong time. But overall, he’s a reliable, responsible, and levelheaded friend.

Despite her polite, naïve, and kind personality, Princess Bubblegum seems to have a twisted side, too. She’s usually all bubbly and lovely. But in some episodes, we see her doing somewhat controversial things, such as cutting some innocent creatures’ legs for some reason.

She’s not your usual vampire. This red-stuff-consuming creature is a musician who doesn’t like violence. However, just like Princess Bubblegum, she has some rather twisted sides, too. In the series, we also realize that Marceline is quite emotional that she cannot let go of her Teddy bear.

What about other characters of the show?

The Cartoon Network’s hit introduced hundreds of memorable creatures and species in its ten seasons. So, it’s not an easy task to discover which Adventure Time character you are on your own. That’s why we recommend taking the personality quiz instead. You can finish the whole questionnaire in less than 5 minutes and receive your accurate results for FREE.

What’s the Point of Taking an Adventure Time Personality Test?

The point is to see yourself from a completely different point of view. It might sound like a silly thing to ask, “Which Adventure Time character am I?” But the truth is that matching a specific weird personality actually reveals so much information about you—and the type of person you are.

For instance, our data shows that people who match Finn tend to be heroic and spontaneous. That’s while those similar to Marceline often struggle with depression or general anxiety.

QuizExpo does not own any of the images used in the ‘which Adventure Time character are you quiz.’ Warner Bros. owns all the said pictures. No copyright infringement is intended. Please, contact us with any concerns.