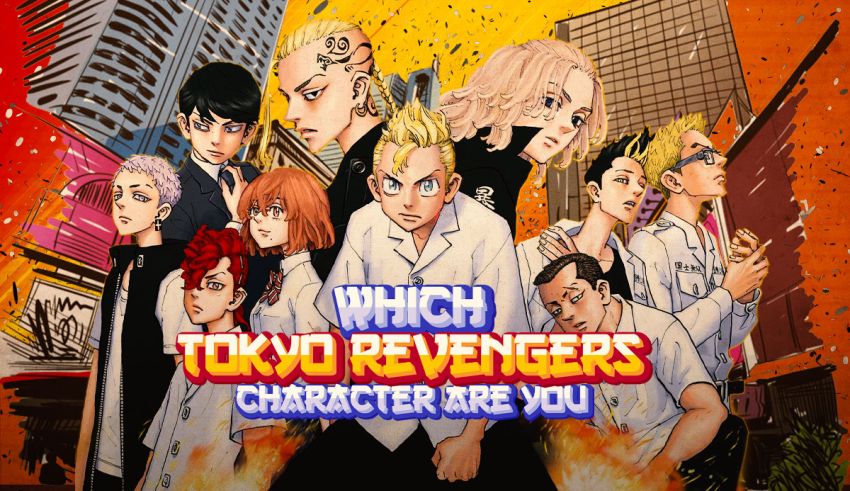 This ultimate personality quiz helps you find out which Tokyo Revengers character you are by 20 simple questions. Are you Takemichi, Mikey, Draken, or else?

The test is a series of questions about your behavior and appearance with the goal of discovering your Tokyo Revengers character match. It identifies which middle-schooler boys or girls of Mizo Middle School are similar to you.

Similar to our Jujitsu Kaisen character quiz, we create your profile before matching it to that of the anime personas. But the questions are a bit darker since Tokyo Revengers is a rather graphic Shōnen.

The main goal is to answer, “Which Tokyo Revengers character are you?” We collect data and create your virtual avatar based on your responses. Then, we compare it to our database of the anime’s personalities to find the perfect match.

The Tokyo Revengers quiz also reveals your motorcycle gang as a bonus feature. The test includes all the gangs on the show and uses your personality to figure out which one would recruit you.

The cool thing about the quiz is that it breaks down your character. So, by the end of the test, you also know what kind of person you are and why you matched a specific Tokyo Revengers gang member.

How to Match Your Persona to One of the Characters

It’s always challenging to find out which anime character you are. But thankfully, most anime shows have fandoms that describe each character’s personality so you can decide which one you represent in real life.

Read the following persona descriptions of the main characters and see if you relate to any of them. If you do, that particular boy/girl is probably your match.

As the show’s protagonist, Takemichi starts off as a timid boy with undeniable low self-esteem. However, he becomes a determined, hardworking, and reliable individual upon discovering his time-traveling abilities.

He’s even shown to put others’ needs before himself, trying to build a better future for them. But Takemichi is also confused about his values and goals at times. He needs to remind himself of his path and make critical decisions to achieve his ultimate purpose: saving his loved ones.

Not many fans would pick Hinata if you asked them, “Which Tokyo Revengers character are you?” But she’s definitely one of the most believed girls in the anime—and probably many Otakus’ waifu.

Personality-wise, she is outgoing, upbeat, optimistic, and strong-willed. Everyone could rely on her energy because she could easily cheer them up. It’s quite easy for Hinata to befriend people and get closer to them. And that makes her a popular girl in the entire Mizo Middle School.

Also known as Mikey, Manjiro is one of the most popular characters in Tokyo Revengers. He’s strong, clever, and witty, but also reckless. As the leader of the Toman gang, he causes fear in his enemies, and even some of his own gang members are fearful of his power.

Manjiro has an active dark core or dark impulsivity that causes him to struggle with anger issues. And he gradually turns into a coldhearted leader who cares about nothing but destroying his enemies.

Although a bit rude and blunt, Draken is a fan-favorite character in Tokyo Revengers anime and the quiz. Despite being a badass gang member, he has a soft and caring side that he only shows to his closest allies.

But similar to Mikey, Ken also goes through extreme rage episodes, which turn him into an unstoppable, scary monster. Though, he’s always been kind to his best friend Mikey and has never stopped protecting him.

Tokyo Revengers (aka 東京卍リベンジャーズ) has lots of interesting personalities. And it’s quite time-consuming to review all of them to find you’re your match. So, taking our genuine quiz is actually your best bet. It’s accurate and covers all the main characters.

Are You a Toman Member or a Casual Middle-Schooler?

The quiz helps you answer things like, “Which Tokyo Revengers character am I?” But it’s not dedicated to gang members only. You might realize that other non-gang-member characters share more characteristics with you. Take Hinata, for example. She’s a bright, outgoing girl that has nothing to do with the cruelty of Toman or other groups. Nothing could stop you from matching her—but your own responses.

QuizExpo doesn’t own any of the Tokyo Revengers character quiz images. No copyright infringement is intended. Please, contact us for any concerns/requests.