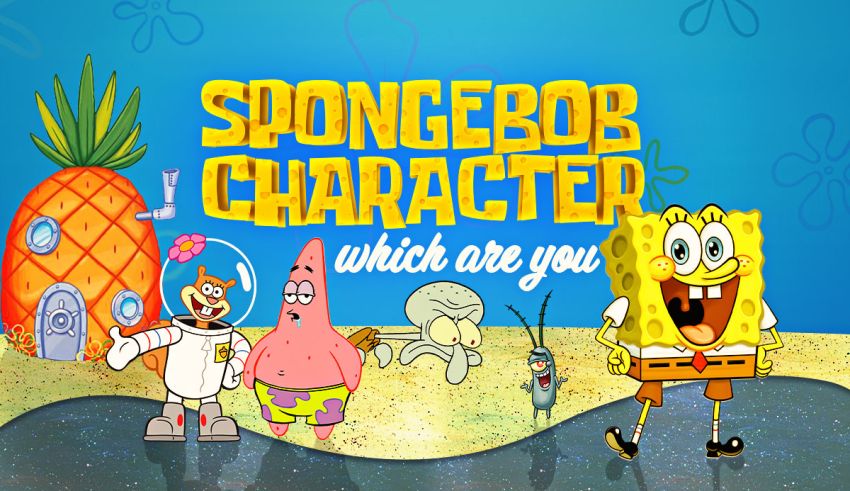 This personality quiz reveals which SpongeBob character you are based on your silly behaviors. Are you Patrick, Sandy, Squidward, SpongeBob himself, or else?

Take this hilarious test to find out which Bikini Bottom personality you represent in real life. It’s the most funnily accurate quiz you’d ever find online, and it includes all the main characters (Even from the spin-offs).

Unlike the SpongeBob trivia quiz, you’ll not face any right-or-wrong questions. And it’s going to be all about your characteristics and silliness level.

Find out which Bottomite you represent in real life.

SpongeBob SquarePants’ characters are unlike mature-ish and dark kids in the South Park series or controversial adults in Family Guys. They’re goofy, loveable, and childishly innocent.

But we believe that there’s a Bikini Bottom character living inside each and every one of you. And the test’s goal is to expose that.

So, we have created a database of all the foolish personas in the show to match you with the most similar one.

Get to know the most absurd aspects of your character.

You’re about to participate in the most unusual SpongeBob quiz ever. It’s different from all other alternatives in that it reveals the most embarrassing parts of your character.

We highly recommend you avoid taking it if your tolerance for humor is low because the results are brutal. But we also dare you to take it and share the results with your friends if you have a good sense of humor.

The problem with other SpongeBob character tests is that they ditch the fun, turning it into a boring MBTI-like questionnaire. But that’s not how things work here.

You have 20 entertaining questions with multiple silly options to discover your Bikini Bottom match.

Plus, you’ll learn more about amusing aspects of your own persona along the way—something that no other quiz offers.

So, if you need a questionnaire that’s at least as fun as the SpongeBob SquarePants show, don’t look any further because you’ve already got it.

How to Know Which Bikini Bottom Character You Are

The official SpongeBob Fandom has a brief personality description for each character. So, one way is to read all these breakdowns and decide which one you relate to. But beware that it’s quite time-consuming.

The following descriptions might come in handy if you want to find your SpongeBob match on your own.

Personality-wise, he is fun-loving and happy-go-lucky. SpongeBob might seem to be clueless at times. But he’s actually intelligent, clever, and rather righteous.

He is the go-to option of most fans when they’re asked, “Which SpongeBob character are you?”

Patrick’s personality can be described as childish, rude, and airheaded. Like most of his family members, he has no idea of common sense and often seems ignorant.

Still, fans love Patrick so much that he’s actually one of the most popular results in our SpongeBob quiz. People adore his sheer cluelessness and dumb moves. And they’ll be happy to have him as their Bikini Bottom counterpart.

Although the grumpiest Bottomite, Squidward is actually a likable guy who just wants to be left alone. His personality seems to be stubborn, arrogant, and rather impolite. But he actually has a heart of gold behind his sarcastic persona. And he genuinely cares about his friends: Patrick and SpongeBob.

She starts off as a crazy character that does unbelievably dangerous stuff. But over time, her personality develops into a kind and caring individual who’s always there for her friends.

Sandy is also bold, courageous, and competitive. We see her aiming for ambitious goals throughout her adventures in the Bikini Bottom universe without hesitating to take risks when necessary.

But despite all that, most levelheaded SpongeBob fans end up matching Sandy because of her overall mature persona.

Bikini Bottom is full of interesting characters. And it might be challenging for you to learn more about their personalities because there are just so many of them. So, we’d recommend you to take the quiz instead. It’s the fastest and most convenient way of determining your perfect match with unexpectedly high accuracy.

The Good News: SpongeBob Spin-Off Characters Are Included, too

We told you: it’s not an average quiz. It has all the beloved sea creatures from The Patrick Star Show and Kamp Koral. So, you might end up matching other lovely characters such as Squidina, younger Mrs. Puff, or even GrandPat Star.

Ready to Meet Your Bottomite Soulmate?

You’re a couple of questions away from meeting your one and only SpongeBob counterpart. So, don’t hesitate to tap the start button and roll into your journey into the Bikini Bottom universe. We promise that the ride will be enjoyable, surprising, and satisfying.

Devoted SpongeBobians created the test. And they’ve ensured it rocks harder than Rock Bottom creatures. So, give it a try. You won’t regret it.

QuizExpo does not own any of the images used in the SpongeBob character quiz. Nickelodeon and Netflix own the rights to the said pictures, and no copyright infringement is intended.