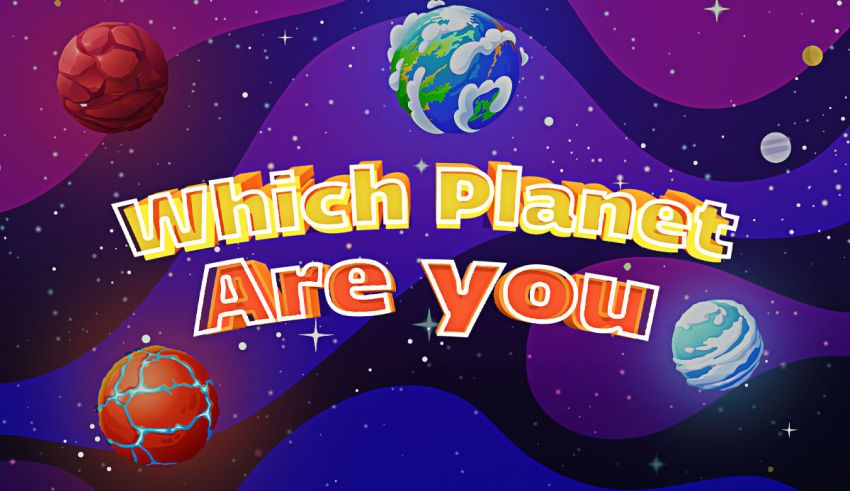 This Solar system planet quiz will show which planet you are by asking 20 simple personalty questions. Are you Mercury, Venus, Earth, Mars, or the others?

There are eight planets orbiting our sun in the solar system. Although astronomers initially thought of Pluto as the ninth planet, more recent studies have categorized Pluto as a dwarf planet. Anyways, planets are pretty amusing phenomena. Each celestial body has a unique set of characteristics, just like ordinary people. The which planet are you quiz tries to reveal which globe matches your personality based on your stellar attributes. If you want to test your knowledge about our solar system check this amazing planet trivia quiz.

Here are some significant factors about these celestial bodies that we have considered in this test:

The first and foremost consideration is how far a planet is from the star since the distance impacts the average temperature of the celestial body and how long a year is on the globe.

Secondly, we’ve translated a planet’s rotational speed into how active and hyped a planet is. In other words, the shorter the days are on a planet, the more agitated and energetic it is. Moreover, we have linked the mass of a globe to people’s physical attributes, such as weight and strength.

The third aspect we’ve scrutinized is a question of chemistry: what are the substances found on the planet, and what each member of our solar system is made of.

Last but not least, we discuss the superstitions and rumors around each planet to go beyond the limits of science and reason. There are pretty interesting stories about each globe that we’ve discussed further.

Which planet are you quiz results and interpretations

Based on your answers, the test will assign a planet from our solar system to you. As mentioned earlier, Pluto is not viewed as a planet anymore; thus, we’re only stuck with eight planets: Mercury, Venus, Earth, Mars, Jupiter, Saturn, Uranus, and Neptune. Then, we have handpicked the five most interesting celestial bodies that represent different personality types as follows:

The second planet from the sun shares its name with Venus, the goddess of beauty and love. The atmosphere on Venus is so dense and hot that no spacecraft has lasted more than two hours on the surface of Venus. Every year on Venus is equivalent to 224.7 days on Earth, making it the fastest globe, second only to Mercury.

If you are Venus, you are self-centered, confident, and lovely. You Enjoy dancing and sports as they allow you to keep your body in shape and contribute to your mental and physical health. People who want to grab your attention have to respect and compliment you, even though they might be deceiving you.

The Earth is our sweet home. The only planet that hosts life orbits the sun between Venus and Mars, the gods of love and war. It was believed for many centuries that our planet was the center of the universe, and it was flat. Thus, it is fair to say that it’s the most misunderstood globe because we overestimated our knowledge.

If you are Earth, you are full of life, hospitable, and generous. You are down-to-earth and don’t care how people judge you. Like the Earth, whose best friend is its one and only moon, your best friends are few yet worthy and loyal. You try to keep different needs in balance to achieve ultimate redemption and peace.

The fourth planet from our star is also known as the god of war since it glows in a bloody red gloom. There is evidence of water on Mars, and the terrestrial elements on its crust are similar to Earth. It seems as though the celestial body could have hosted life in the past. Yet, today the atmosphere is too thin, and the temperature is too frigid for any organism to survive on the ruthless globe.

If you are Mars, you are the champion of all planets. You’re extremely competitive and fierce, especially in sports. Sometimes emotional fluctuations make you act on impulses that scare people off. Therefore, you should channel your emotions through physical activities to keep your soul satisfied without harming yourself or others. Like the god of war, you have a weakness for beautiful creatures, and you are a superb lover.

The fifth planet is an absolute behemoth! Jupiter has no surface, for it’s not a terrestrial planet; it’s a giant globe made of gas. However, it has 80 known natural satellites, including four Galilean Moons called Io, Europa, Ganymede, and Callisto. These moons are visible from Earth with binoculars on a clear night.

If you are Jupiter, you are quite the artist. People who are Jupiter are mostly introverted and contemplating. You are surrounded by people and famous; however, few people know who you indeed are since you’re highly flexible and have no trouble blending into a group. You like to create art and let your artwork unravel your thoughts. Jupiter is the God of gods; thus, you were born a natural leader.

The lord of the rings is the sixth planet of our solar system. Saturn is a gas giant embellished with rings of ice and stardust, making it a mystical figure in the sky. Over 80 satellites orbit Saturn, with Titan being its most famous moon.

If you are Saturn, you are intelligent, rational, and organized. Unlike emotional celestial bodies like Venus and Mars, who live in the moment, you are a master strategist who plans every move. You’re not a huge fan of surprises and prefer things to go as expected. Accountability, fairness, and faithfulness are your intrinsic qualities. People around you can count on you because you keep your promises.

Now that you know all about “which planet are you quiz” let’s dive into the questions.

Disclaimer: QuizExpo does not own any of the images used in the which planet are you quiz. All the photos were used from NASA, Pixabay, Unsplash, Envato, and Twenty20 websites, and we intend no copyright infringement.