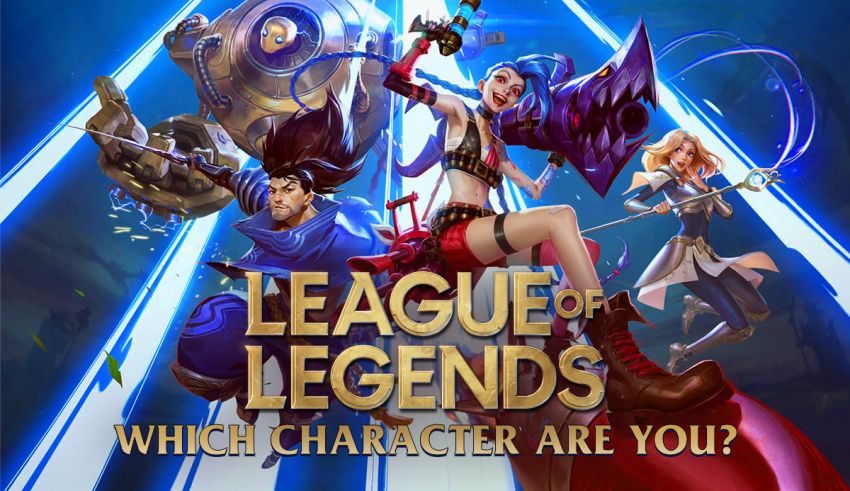 This League of Legends quiz reveals which character you are based on your playstyle, favorite class, and personality. Are you Ezreal, Lee Sin, Leona, or else?

A Pro League of Legends Quiz to Discover Your Champion

The LoL test is a series of player persona and gameplay questions to discover your League of Legends character match. It is based on a database of the159 champions’ profiles.

Similar to our other mobile game quizzes, like Minecraft Mob Match, the questionnaire has no right or wrong answers. So, you need to pick options that make the most sense.

However, if you’re into trivia tests, make sure to check out the Amazing Fortnite Quiz, which is currently trending.

The goal of the test is to answer questions like, “Who’s your League of Legends kin?” We reveal which of the game’s main characters has a similar personality as you and why.

Discover your class and abilities.

One of the perks of the LoL quiz is determining your actual class based on your personality. You might be an Assassin in the game but end up matching, say, a catcher. That’s because your in-game preferences are not the only metric. We analyze your persona, too, to classify you with the highest accuracy possible.

Find out more about your champion’s personality.

The 2022 LoL quiz considers the lore and canon events to deliver the best results. Your results include detailed breakdowns offering more insight into the character of the champ you match. You learn their backstories, motives, and even personality types.

How the LoL Champions Quiz Works

The test has three main segments: Gameplay analysis, interest inspection, and persona generation. Each segment helps us narrow down the results and find your perfect match among League of Legends champions. Here’s what you need to know.

How you play LoL, Wild Rift, or even Legends of Runeterra affects the test results. Are you an all-out fighter, a stealthy assassin, a long-range mage, or else? The answer can help discover the champion that you represent in real life.

Going through your interests and habits.

Things you like and dislike can determine what type of person you are. So, it’s important to know them before answering a question like, “Which League of Legends champion are you?”

Creating your persona in the game’s lore.

We need to know how you’d react to the events of Valoran had you been living there like a champ or hero. That’s the only way to discover which character of the game is actually similar to you. So, we use your responses to create your parallel fictional persona before showing the results.

How to Know Which League of Legends Champion You Are

You can head to the game’s official fandom and check out the list of champions to find your match. However, you probably need to read most of the 159 champs’ backstories and personality descriptions to find the one that you resemble in real life.

It’s not the smartest idea, but your only other option is to take the LoL character quiz. So, it’s a choice between doing the hard work yourself or trusting our precise AI-powered questionnaire.

Here’s a brief personality breakdown of some of the popular champs in case you want to meet your matching character the hard way.

Current LoL statistics show that the Prodigal Explorer is the most-played champion. He’s described as an adventurer whose bravery can be both a problem-solver and troublemaker. Ezreal likes to improvise his way out of dangerous situations, and he often relies on his wits for that.

Ask fans, “Which League of Legends champion are you?” and you’d be surprised by how many of them picked Leona the Radiant Dawn. She’s portrayed as a strong warrior who brings knowledge and enlightenment with herself. Personality-wise, the holy vanguard is brave, bold, and calm.

The Night Hunter is vengeance and remorseless. Her bloodlust is only satisfied when she slays her enemies. Personality-wise, Vayne can be described as goal-oriented, serious, and distant. Traumas of her past are still haunting her, but she remains a deadly marksman protecting her homeland.

The Chain Warden is cunning and sadistic. His ambitious and restless nature push him to be one of the most vicious champions of League of Legends. Despite that, many players would actually pick him when asked, “Which LoL character are you?” That’s because he’s undeniably strong and reliable in the battles.

As of 2022, the game has more than 159 champions—and more are probably yet to announce. So, it’s not an easy task to find your counterpart or soulmate on your own. Taking the League of Legends quiz is the easiest, fastest, and most accurate way of discovering your match, though. It considers every aspect of your personality and how you play the game to finetune the results.

What Makes the League of Legends Quiz Special?

This is the only LoL champion quiz that is created by pro players. Unlike other alternatives, it doesn’t contain unrelated questions like ‘What is your favorite color?’ Instead, all questions are inspired by the game’s lore and the latest updates to the gameplay. And that’s what makes it so special.

If you’re looking for a genuine quiz made by gamers for gamers, you’ve come to the right place.

QuizExpo does not own any of the images used in the League of Legends character quiz. Riot Games owns all the said pictures, and no copyright infringement is intended.