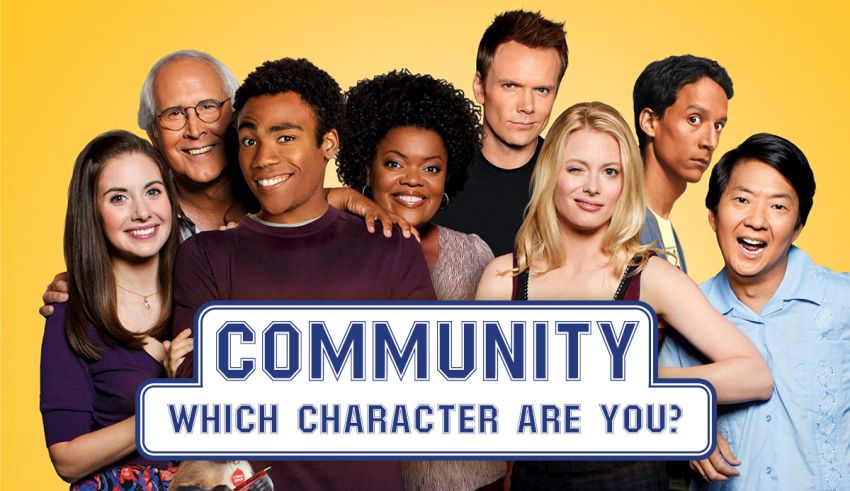 Do you want to know which Community character you are? Answer 20 meta-humor-ish questions to find out. Are you Abed, Jeff, Troy, Annie, Britta, Shirley, or else?

In Case You Are a Newbie

Community is an NBC sitcom about a group of friends trying to figure out who they are in a community college. Dan Harmon, the creator of Rick & Morty, is the guy behind the show. At it ran for six seasons from 2009 to 2015.

The main character is Abed, a guy who is preoccupied with pop culture and TV. And the story revolves around his growth as a socially awkward adult.

Some believe that the show’s humor is similar to that of The Office. But when it comes to intimacy and relationships, it resembles sitcoms like New Girl or even Friends.

The test on this page reveals which of the Community characters is similar to you. All you need to do is answer several personality questions.

Fans love meta-humor and geeky references in the show. That is why we created a comedy-driven test to expose your true character. The Community Quiz is a set of absurd questions that help us dig deep into your true self and discover your fictional counterpart.

What Does the Test Tell You?

The quiz answers one of the fans’ biggest questions, “Which Community character am I?” But it offers additional information, too. By taking the test, you receive a comprehensive result, including the following reports.

The results reveal which of the Study Group members you are. The good news is that all the main characters such as Abed, Jeff, Britta, Annie, etc., are included. Since it is a psychological forced-choice quiz, the matching system is 100% accurate.

Romance plays an important role in the show’s plot. So, we wanted to answer questions like, “Who is your Community boyfriend or girlfriend?” The results include a crush analysis, exposing your possible feelings for other personalities.

Matching a particular Community or Study Group character conveys a meaning. Why, say, Abed and not Jeff? Why Shirley and not Britta? We use these pieces of information to deliver a surprisingly accurate behavior and temperament description.

Seriously, Which Community Character Are You?

Not everyone wants to go through a 20-question quiz for this. So, here is a faster way of discovering your Community character match. Read the following description and see which one resembles you.

Obviously, this is going to be boring and inaccurate. So, why don’t you just take the quiz?

As the show’s protagonist, Abed is a socially awkward guy who cannot pick up social clues. His friends describe him as an intelligent person. But it is challenging for Abed to understand what others feel. He is an excellent observer, memorizing every detail of his interactions. Plus, he takes role-playing seriously.

Being the most sarcastic Study Group member, Jeff is also somewhat egoistic. He keeps people at a distance and is insecure about his look. But Jeff is known as a charming and lovable guy. Although he hides his feelings, he is an emotional person.

Troy and Abed from a bromance during the show’s first couple of seasons. He is obsessed with gaining others’ love and respect. But people know him as a giving and caring person. Troy is willing to sacrifice himself for his friends. And everyone loves his heroic character. However, like many other Community characters, Troy has insecurities. He thinks he is unwise and silly—especially compared to Abed.

She is probably the brightest and most optimistic person in the show. Annie is a Type A personality who is very ambitious, studious, and organized. But her romantic side makes her a cute and lovable girl. Many girls who ask, “Which Community character am I?” would love to match Annie.

She is one of the kindest personalities in the Greendale Community College. Shirley is a motherly figure with a heart of gold. Everyone counts on her pieces of advice. And she is always there for anyone who needs helps. However, she is a highly religious woman with somewhat of a rage issue. Shirley believes that she has a bit of a gossiping problem. Plus, she just loves saying, “Oh, that’s nice.”

You might be other characters of the Study Group. There is no other way to find out who your perfect match is unless taking the quiz.

An Ode to Community and Its Parasocial Nature

Abed is obsessed with pop cultures, TV shows, and movies. For many, his fixations seem rather exaggerated and weird. But Dr. Karen E. Dill-Shackleford says, “The one-side Parasocial relationship is deeply social.” As a well-known psychologist, she believes that “We empathize with these imaginary creations. But we are also relating them to the very real stories of ourselves.”

Look at you. You want to know which Community character you are. Doesn’t that put you in a Parasocial relationship with the NBC sitcom? The real question, though, is that a bad thing? Should we avoid such imaginary bonds at all costs? Or should we use them as a chance to explore our own identities?

Okay, that was too philosophical for a Community character quiz. But hey, “We’re the only species on earth that observes shark week.”

QuizExpo does not own any of the images used in the ‘Which Community Character Are You Quiz.’ NBC and Yahoo! own all the said pictures.