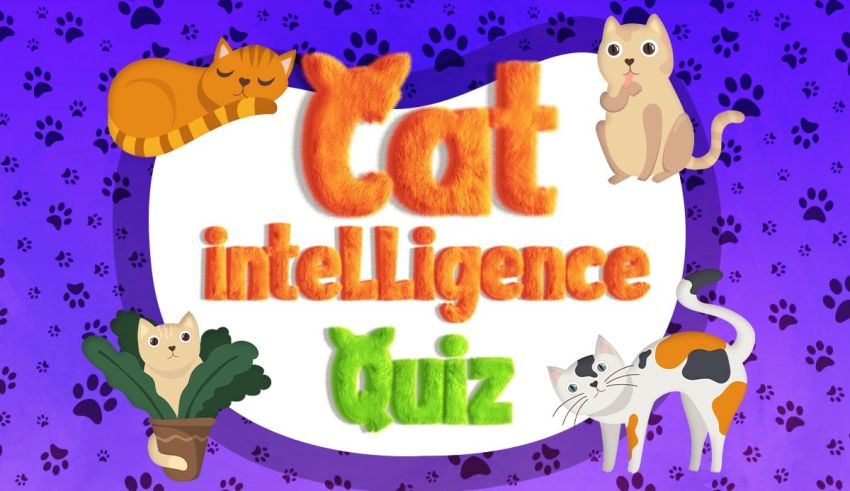 The cat intelligence quiz determines how smart your kitten is based on feline IQ studies. Just answer 20 simple questions about your cat to find out.

Comprised of 20 intelligence quotient questions, the test is an assessment of your cat’s brainpower.

A cat’s brain, although relatively smaller than most felines’, has enough neurons to make it intelligent.

But the question is: How smart can it be?

How Smart Is Your Kitten?

On average, a cat is as smart as a toddler, capable of understanding vocal or spatial clues, social responses, emotional bonds, and the existence of nonapparent items. (AKA object permanence).

How Can You Test Your Cat’s Intelligence?

There are 3 tests to measure your cat’s IQ: 1) Hide a treat under glass. 2) Leave your cat alone in a room for a while. 3) Act suspicious or scared of a new object.

If your cat retrieves the treat, greets you upon getting back to the room, and reacts to the new object the same way you do, it’s intelligent.

However, if it ignores the hidden treat, your return to the room, or your reaction to the new object, its intelligence is average.

What Are the Criteria for Assessing Cat Intelligence?

As with other animals’ IQ, the cat’s intelligence is examined based on the following three factors:

An average feline understands hidden objects exist despite getting concealed or obscured. It is able to locate an item—or at least guess its possible location—after it’s out of sight.

To test that, show your cat its favorite toy and then hide it behind a piece of furniture. See if it searches for the toy around the same area or forgets about it.

Cats respond to humans’ emotions and social clues. For example, they refuse to interact with things that humans are afraid of. The phenomenon is called social referencing, the act of responding to new concepts based on others’ reactions.

To test the theory, act scared of an unknown object. See if your cat avoids it, too.

Although different from humans’ attachment styles, cats, too, create emotional bonds with their owners. Secure attachment, the healthy relationship between the animal and owner, indicates higher intelligence. Contrarily, insecure and non-apparent attachments suggest the opposite.

To test your cat’s attachment style, observe its reaction after reconciling with you.

For a better analysis, take our other quiz, Does My Cat Love Me?

Are Cats More Intelligent Than Dogs?

Cats are NOT more intelligent than dogs. They have half as many neurons as dogs in their Cerebral Cortex, making them slower learners.

But being slow learners doesn’t mean cats are less intelligent than dogs. Cats are clever in different ways than dogs. For example, they are better at demanding needs such as food, attention, and affection.

Things to Know Before Taking the Quiz

You’re questioning your cats’ cleverness. You want to know if it’s really aware of your relationship and likes you back. (We get it). But there are three things you must know before participating in the test.

While cognition is the ability to think of things, intelligence is the ability to use cognition for problem-solving. A non-intelligent cat is still cognitive. It has consciousness. In other words, it knows who you are and is aware of your emotional bond—despite being bad at solving problems.

A valid intelligence test is harmless, non-compulsory, and repeatable.

Don’t repeat what you see on TikTok. Grabbing your cat and rushing it toward a wall is not how you test its intelligence. (Your cat might simply avoid stopping you because it trusts you).

Some test questions require you to do a certain experiment with your cat. If that’s the case, please remain patient and repeat the process several times for accurate results.

In about five minutes, you will learn how smart your cat is.

Note that guesswork decreases the test accuracy. So, it’s best to experiment with your cat and observe its reaction before answering the questions.

By the way, for a super-fun experience, check out “What Cat Breed Are You?” next.