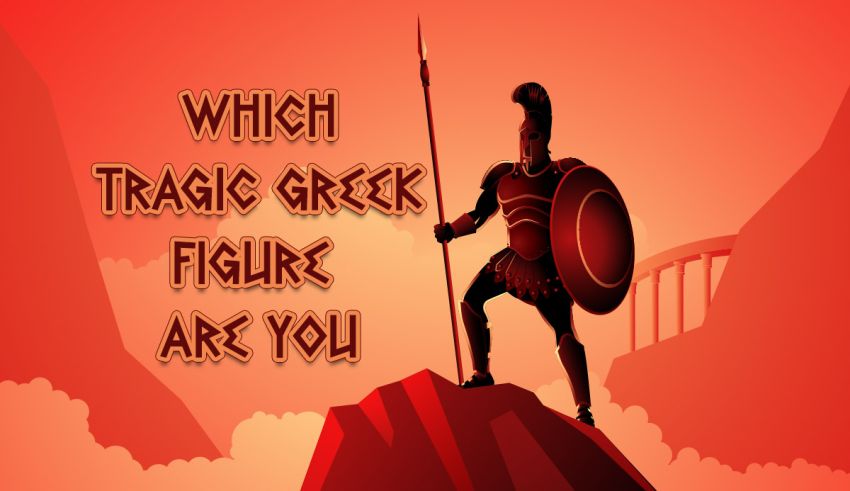 This quiz will reveal which tragic greek figure you are with 15 personality questions. Are you Achilles, Bellerophon, Cyparissus, Orpheus, or else?

What is the tragic Greek figure quiz about?

It is a personality test that matches you to one of the tragic greek figures with questions about your lifestyle, love status, and feelings. The main figures are Achilles, Bellerophon, Cyparissus, Orpheus, Patroclus , Odysseus. You find their personalities in the following summarized table:

Find out more about these Greek Figures.

Here are the famous figures:

Achilles was a strong warrior in a story from ancient Greece. The story is called the “Iliad,” written by a poet named Homer. Achilles was the son of a goddess and a mortal man. He was known for his bravery in battle and his great strength. But Achilles had one weakness, and that was his heel. It was said that if someone hurt his heel, he would die. In the story, Achilles is killed by an arrow shot into his heel.

Bellerophon was a brave warrior and a hero in ancient Greek myths. He was known for taming and riding the winged horse Pegasus and killing the monster Chimera. Bellerophon was the son of a king and was raised by another king as his son. He went on many adventures and was known for his courage and strength. He was also known for his tragic end, where he angered the gods and was punished by being banished and living out the rest of his life alone.

Cyparissus was a beautiful young boy in ancient Greek myths. He was known for his love of animals, especially for a beautiful white stag. He was so sad when the stag died that he asked to be turned into a cypress tree, a tall, thin tree often used in gardens and cemeteries. The gods granted his wish, and from then on, the cypress tree was a symbol of sadness and mourning.

Orpheus was a musician and a poet in ancient Greek myths. He was so talented that his music could charm animals, rocks, and trees. He brought his wife Eurydice back to the land of the living with his music, but unfortunately, he failed to follow the instructions and lost her again. Orpheus was also known for his journey to the underworld, where he tried to bring back his wife a second time, but he could not do it again. Orpheus is remembered as a symbol of the power of music and its ability to move people’s hearts.

Patroclus was a close friend and companion of Achilles in ancient Greek myths. Patroclus was not as strong or skilled in battle as Achilles, but he was a brave and loyal warrior. He fought in the Trojan War alongside Achilles and helped him in many battles. When Achilles refused to fight, Patroclus put on his armor and fought in his place but was killed by Hector. Patroclus’ death deeply saddened Achilles, and it was a significant factor in his decision to rejoin the battle and ultimately kill Hector. Patroclus is remembered as a symbol of friendship and loyalty.

Odysseus was a hero in ancient Greek myths. He was the king of the island of Ithaca and a skilled warrior. He fought in the Trojan War and was known for his intelligence and cleverness. He was famous for his journey home after the war, which took him ten years to complete. He faced many challenges, such as the wrath of the sea-god Poseidon and the allure of the sorceress Circe, but he overcame them.

Let’s find out your character.

If you are curious to find your match, start the personality test and answer 15 simple questions to reveal your Greek myths.