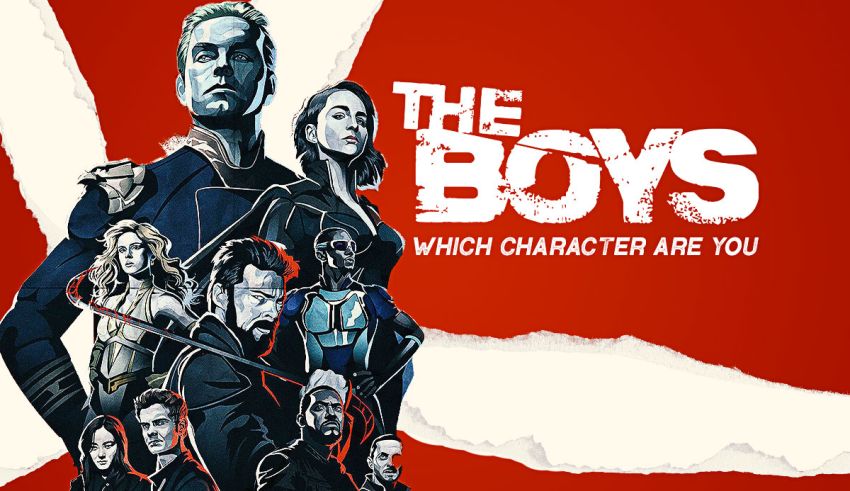 If you want to know which the Boys character you are, take this Supes and anti-Supes quiz inspired by the comics and the Amazon Prime adaptation. Are you Billy, Hughie, Starlight, or else?

It’s a series of questions based on the events of seasons 1, 2, and 3 of the Boys with the goal of identifying the character who shares a similar personality as you.

Suggested: Take the Boys Trivia Quiz if you want to put your knowledge to the test.

Are You One of the Boys or the Seven?

The Boys are a group of vengeful individuals who want to destroy Vought International, the company covering up for the Seven, the vicious Supes.

But the question is this: Are you team Boys or team Seven? Taking the quiz could expose the answer.

We analyze your motivations, ideologies, and traits to decide if you are a powerful but ruthless Supe or a righteous but vengeful New Yorker who hates the Super-Abled.

How to Know Which the Boys Character You Are

Determining your counterpart in the Boys is more complicated than figuring out which Superhero you are. It’s because the show’s actual anti-heroes are the real protagonists, while its superheroes are the villains. (Pretty complicated).

But one way to find your matching character is by reading their description. The following are several main characters’ personality analyses that might help with that.

Despite being a vengeful person, Billy is actually kind and caring. Yes, he is determined to take down all the Supes no matter what. But that doesn’t get in his way of protecting his friends or other the Boys members.

Before losing his girlfriend in a tragic accident, Hughie was a compassionate and timid guy. However, seeking to avenge his loss and later joining the Boys brought out the darker sides of his personality.

A natural idealist, Starlight has a strong sense of right and wrong. However, feeling betrayed by her loved ones, she’s often confused about her decisions and regrets most of them.

Other Supes and characters.

A quick look at the list of the Boys characters is enough to realize that the show’s 30+ main and reoccurring characters make it quite a challenge to discover your lookalike. Some even suggest that it’s easier to figure out which Marvel character you are.

But you have nothing to worry about because The Boys Character Quiz has got you covered. All you have to do is answer 20 entertaining personality questions to meet your Supe or anti-Supe counterpart.

This Quiz Is Based on the Boys’ MBTI Type

We’ve analyzed every The Boys character’s MBTI type, creating a detailed database. So, you are guaranteed to discover which character you are with accuracy.

Reveal the Supe or Anti-Supe in You

You are now ready to meet your inner the Boys character. Would you match a narcissistic Supe or an angry New Yorker looking to take superheroes down? Well, take the quiz to find out.

QuizExpo does not own any of the images in “which the Boys character are you quiz.” Amazon Prime owns the rights to all the said pictures, and no copyright infringement is intended.