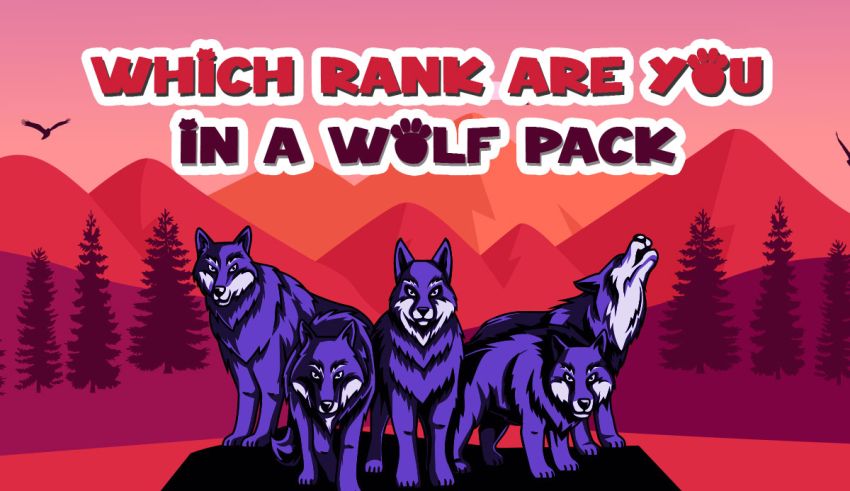 Do you want to know which rank you are in a wolf pack? Take this hunting, mating, and breeding quiz to find out if you’d be an Alpha, Beta, Omega, or just a lone wolf.

How to Guess Your Rank in a Wolf Pack

In theory, you are an Alpha wolf if you like to be in charge of a group. If you prefer to be the second-in-command and watch out for the group members, you’re likely a Beta. But if you choose to stay out of trouble and refuse to take charge, you’re Omega.

It’s also possible that you don’t fit in any of the wolf pack ranks. In that case, you are a lone wolf, a Beta who leaves the group to start its own pack.

Take the Wolf Role Quiz to Discover Your Position

By taking the test, you find out what you’d do if you lived in a K9 pack: Would you become the leader? Would you be the warrior? Or would you rebel against the hierarchy and start your own independent journey?

Knowing your wolf pack rank differs from discovering your animal spirit. It’s more of a behavioral analysis, determining your role in social environments.

Which of the Four Wolf Pack Ranks Are You?

To accurately decide which role one could have in a group of predators, you need more info than their typical behavior.

In others words, just because your boss leads the company doesn’t mean they’re an Alpha male or female. They could actually have the lowest rank, Omega, due to their passive social behaviors.

So, unlike determining one’s dog breed type, you can’t be certain about someone’s wolf role knowing only their basic features. Regardless of their social status, any individual could have one of the following ranks.

Also called the leader, an Alpha wolf is in charge of everyone in the pack. It decides when to hunt, who to attack, and who to eat first.

Theoretically, some wolves in a pack become the second-in-command unite, fighting and hunting for the group under the Alpha’s lead.

The term was coined to refer to wolf packs’ lowest-ranked and weakest members.

When a Beta leaves the pack to start its own family, it becomes a lone wolf.

Other Interpretations of the Wolf Roles

Alpha, Beta, and Omega have created a whole subgenre in art, literature, and cinema. (Take Omegaverse as an example). But that’s now how most scientists categorize wolves. In fact, there are other interpretations based on breeding and relationships as opposed to power hierarchies.

According to the International Wolf Center, “most wolves who lead packs achieved their position simply by mating and producing pups, which then became their pack.” So, you could call them breeders or parents.

There’s another classification with four prominent roles: Leader, Warrior, Mother, and Guardian. But it’s pretty similar to the Alpha-Beta-Omega theory. The only difference is the Guardian rank, young wolves who are supposed to protect the pups when other males are unavailable.

The Problem with the Alpha-Beta-Omega Theory

Your biggest question might be something as innocent as, “What role am I in a wolf pack?” But there’s a catch: The idea of wolves living in precisely ranked communities is a myth.

Unfortunately, some people have used the idea of Alpha-Beta-Omega structures to justify their rude, inconsiderate, toxic, and even inhumane behavior. But recent studies show that wolves don’t fight or bully each other to gain power over others.

So, unlike what the media suggests, it’s not the most masculine, badass wolf who gets to lead others after beating his opponents up or tearing them apart. Wolves simply follow their moms and dads like most other species.

Are You a Leader, Follower, Protector, or Breeder?

Whether it’s scientific or not, knowing what role you have in a wolf pack is fun. So, we created an engaging quiz to expose your rank based on your social persona.

But you have to answer the questions as if you were a wolf. That’s how you find out if you are a reliable leader, a daring warrior, or a caring protector or guard.

By the way, if you’re interested in fun personality quizzes inspired by the wildlife, check out our “What Animal Am I Quiz.” It’s a series of creative questions that reveal your inner creature with accuracy.

Disclaimer: Read Before Taking the Quiz

QuizExpo is against any form of discrimination. We are aware that specific groups of people validate their toxic behavior by calling themselves Alpha. But we’ve tried our best to keep the quiz results toxicity-free and educational—as well as entertaining.

Please, contact us if you find any questions or results inappropriate or misleading.

Now, hit the start button and discover your position in an actual wolf pack!