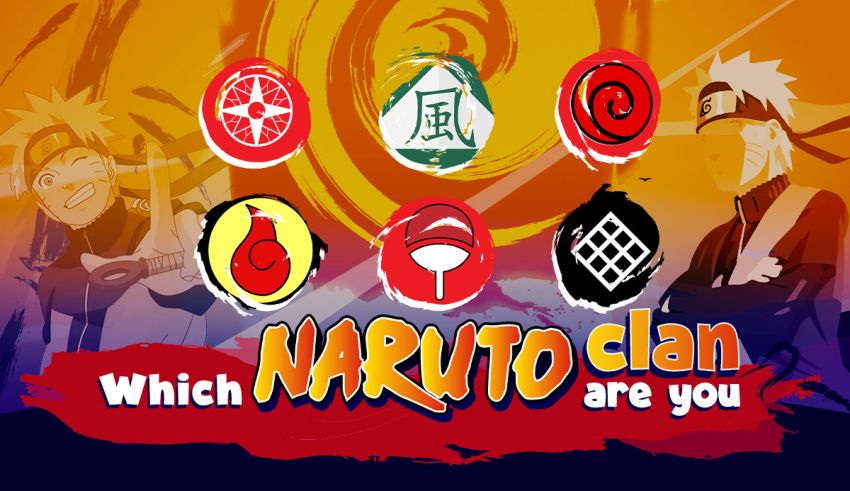 Do you want to know which Naruto clan you are a member of? This shinobi quiz reveals if you belong in one of the four noble clans of Konohagakure or else.

What Is the Naruto Clan Quiz?

It’s a set of 20 personality questions inspired by Naruto (ナルト) events to determine which Ichizoku you belong in.

Unlike Naruto Trivia Quiz, there are no right or wrong answers. So, you need to pick the options that make the most sense to you.

If you’re a newbie, a clan (一族, Ichizoku, or household) refers to a group of shinobi with Kekkei Genkai abilities living together in a village.

It’s confusing to find your matching clan out of 50 groups that the anime introduced throughout these years. Plus, little to no information is available about some households, making it even more challenging to discover your group.

But the Naruto clan quiz will solve your problem. It has a detailed database including all the canon and lesser-known households. So, you’ll find your perfect match in less than a few minutes—with unbelievably high accuracy.

Find out more about your unique abilities.

Each clan has specific skills that separate them from other shinobi. The fun thing about our quiz is that it reveals what kind of unique abilities you’d have if you were an actual Naruto character.

See what famous characters are in your clan.

Naruto personalities have always been among the most popular anime characters. So, fans naturally want to know which one is similar to them or could be one of their allies.

The quiz, therefore, has a specific section to list shinobi who would probably fight alongside you had you been one of their clan members.

Know your Jutsu and your potential to become a Hokage.

For many otakus, becoming a Hokage sounds like the ultimate joy. It’s a title given to the most skillful fighters in the Land of Fire. And so far, the world has only had seven of them. But the quiz wants to know if you could be the eighth.

Get a free personality analysis based on your clan match.

It’s not like we are looking to find your anime character match. But the quiz is designed to analyze your persona while also categorizing you into one of the Naruto households.

So, you will find out what type of person you are and why we think a particular shinobi group suits your characteristics.

How to Know Which Naruto Clan Member You Are

One way to find your clan in Naruto is getting to know each household’s values. You can use the anime’s official fandom to read more on that and see which shinobi village you relate to.

The following information might help you find your Ichizoku.

With only two known members, Hatake is a mysterious clan. Its members are distinguished by their white hair and their incredible battle skills. Kakashi, one of the most popular anime characters of all time, is the most notable member of this household.

As one of the most secretive Naruto households, Hyūga members are obedient and loyal. They would never reveal their Byakugan secrets and would die to protect them. Surprisingly, many Naruto fans pick this Ichizoku when asked, “Which clan are you?” It’s because of the precise attacks of its members and their strong bond.

Uzumaki members are tolerant, tough, and intuitive with their unbelievable long lifespan and exciting healing powers. Mito is one of the famous of this clan, alongside Tsunade and Kushina.

In total, the Naruto anime show has 50 clans.

So, it’s not easy to discover which one you belong in—unless you use an actual personality quiz. We’ve created an entertaining and helpful questionnaire that reveals your Ichizoku in no time. So, why bother researching all the households to find your perfect match?

Discover Your Naruto Clan Based on Your Birthday

Your zodiac sign and birth month can determine which Naruto clan you are a member of.

The following table helps you find your matching household according to your birthday.

Ready for a Poke on Your Forehead?

Do you want a reliable answer to, “Which Naruto clan are you?” If yes, take the test with no hesitation. It compares your personality to that of each canon Ichizoku member to discover the most fitting group. And it’s currently the fastest (and most accurate) tool to do so.

QuizExpo does not own any of the images in the Naruto Clan Quiz. Pierrot holds the rights to all the said pictures, and no copyright infringement is intended.