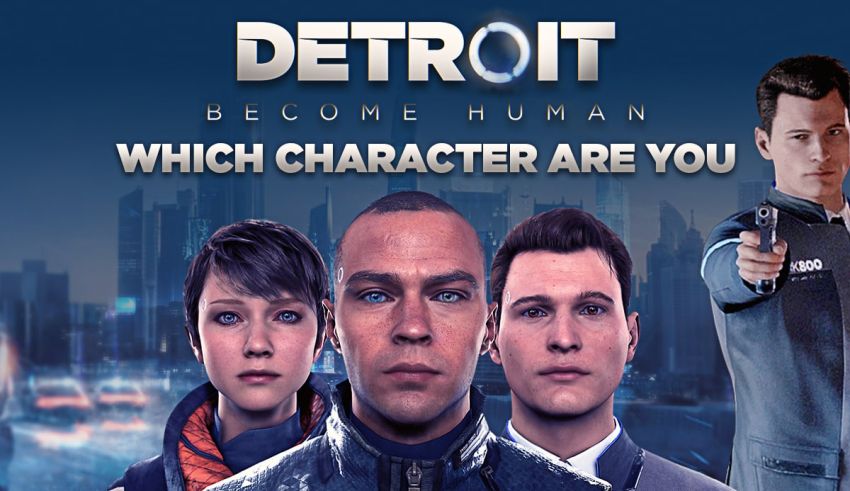 Hey, which Detroit Become Human character you are? This decision-making, video game-inspired quiz exposes if you are Conor, Kara, Markus, Alice, or else.

A Decision-Based Quiz to Reveal Your Detroit: Become Human Character

Quantic Dream’s 2018 video game has various endings depending on your in-game choices. We wanted to bring the same vibe into our personality quiz and urge you to make challenging decisions. The test is a series of questions revolving around the protagonists and their intentions. The goal is to identify which Detroit: Become Human character is similar to you.

Most of the video game quizzes on QuizExpo are designed to be entertaining and informative. But this one is special as it includes deep, gloomy, and profound questions. Just like the game’s story, we want you to face your fears and doubts.

Here’s everything you learn by participating in the test.

Find out which Detroit Become Human character you are.

The premise of the questionnaire is to answer questions like, “Which character am I?” We created accurate profiles of the most iconic persons in Detroit: Become Human. And your responses enable us to find your perfect match in seconds.

See if you are a human or an android.

The game is about a semi-revolution that is about to happen. Androids are becoming humans after becoming deviant and forming groups. During the DBH quiz, you may match a character from either side—humans or androids. We’ve also included other variants, such as AI personalities, to finetune the results.

Discover if you’d be a protagonist or antagonist.

Not every character in Detroit Become Human is good—and the story is a constant battle between good and evil. So, we wanted you to feel the same tension during the quiz. Your decisions might lead you to match one of the game’s antagonists or vice versa.

The goal of the quiz is to answer your big question, “Which Detroit Become Human character am I?” But that’s not all we do here. Your results include a comprehensive personality breakdown, explaining why you matched a particular person or android.

How to Know Which Detroit Become Human Character You Are?

The best method is taking a genuine online quiz like this page. But not every gamer might be up for a 20-question test. However, the alternative way is by reading character descriptions and trying to figure out which one you represent in real life.

It’s not an accurate technique and requires much more time. But if you’re not into online personality quizzes, this is your best bet. You can find some examples of DBH character descriptions below.

Being a dutiful android, Conor wants to get the job done and focus on his missions. He is a responsible officer who believes in law and order. Although your decisions can change him, Conor is a good person deep down.

Those who match Conor in the Detroit Become Human quiz are obedient, reliable, and goal-oriented.

One of the beloved characters of the game is Kara, for sure. She is a sensitive, motherly, and emotional girl who protects Alice no matter what. Despite the traumas Kara goes through, she remains a kindhearted person. However, her fears and anxiety levels turn her into an escapist who wants to get away from danger instead of fighting.

Participants who match Kara in the quiz are caring, giving, and kind. Such people put others’ needs before their own and might become people-pleasers in time.

Starting as a polite and reserved character, Markus becomes a revolutionary leader aiming to change the whole world. He is observant and intelligent and wants equal rights for androids, just like humans. If you ask the game’s diehard fans, “Which Detroit Become Human character are you?” many would say, “I’m Markus.” He is the central point of most events and plays a significant role in the plot.

If you match him in the quiz, you have a strong sense of right and wrong. Doing the right thing is your priority, and you don’t hesitate to warn others when they do something wrong.

You just read the personality description of the three main protagonists of the video game. However, the story includes many other androids and humans that might be your true match. So, make sure to take the quiz if you want a reliable answer to “Which Detroit Become Human character are you?” We have an excellent archive of essential personalities and will find your counterpart in a few seconds.

The Challenge with Creating an Accurate Detroit Become Human Quiz

Quantic Dream’s video game allows you to develop characters. So, none of the protagonists remain the same as soon as you start making your path. That makes it challenging to create a personality match test because there’s no particular definition of each android or human.

That’s why we decided to replicate the gameplay of Detroit Become Human in the quiz and give your multiple choices. Each scenario leaves you with several options, which eventually help us create an accurate profile and finetune the results.

Why do Gamers want to Know Which Game Character They Are?

The story of Detroit Become Human, just like all other games by David Cage, is controversial. Your matching character reveals some of your more profound views on life, humanity, and emotions. That’s why many gamers ask questions like, “Which character are you?” It’s a reflection of your inner thoughts that would’ve never come out if it wasn’t for your matching in-game personality.

QuizExpo does not own any of the images used in the ‘Which Detroit Become Human Character Are You Quiz.’ Quantic Dream and Sony Interactive Entertainment are all the said pictures.

Note that the test includes ideas that might not be appropriate for users who’re 16 or younger. So, user discretion is advised.