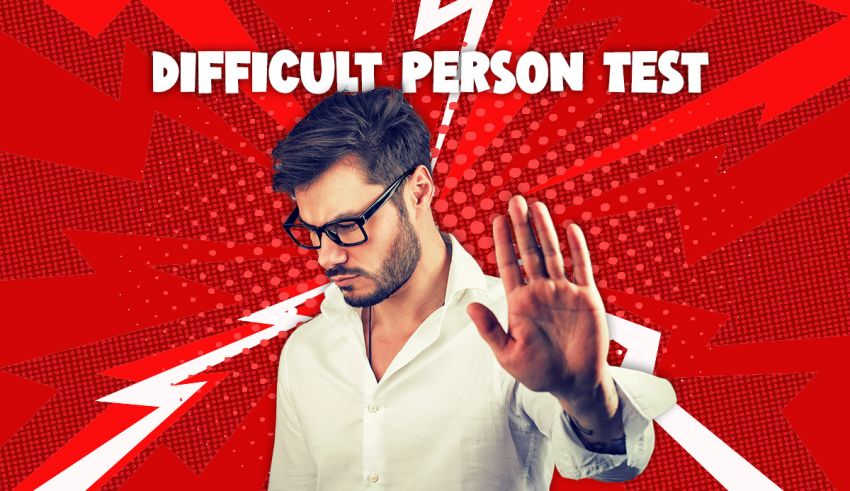 Find out how agreeable, open, and sociable you are with this 2021 Difficult Person Test. It is a simple quiz based on recent studies of the Five-Factor Model.

A Difficult Person Test (characterized: DPT) is a set of self-report psychological questions to identify how agreeable, compassionate, respectful, and sociable a person is. The initial quizzes used Dr. Sleep and her team’s findings on Personality Disorders for their questionaries. But other formats are available, too.

Although the goal is to assess the agreeableness of a person, a standard DPT can do more. The test on this page reveals the levels of sociopathy and antagonism as well.

A Scientific Analysis Based on FFM

A 2020 study at the University of Georgia showed that Five-Factor Model is the best way to identify difficult individuals. According to this model, the level of agreeableness determines whether a person is complicated or not. Our quiz uses the same scientific data to provide you with 100% results.

The primary aim of the test is to evaluate your friendliness and sociability. Higher levels of openness indicate a thinner chance of being a complicated individual.

Based on Dr. Chelsea’s research, seven factors are common in difficult people, “callousness, grandiosity, aggressiveness, suspicion, manipulativeness, dominance, and risk-taking.” The quiz explains which of the said factors are more active in your personality—if there are any.

By the end of the questionary, you receive pieces of expert advice on how not to be a difficult person, an antagonist, or even a sociopath.

According to FFM, personality is a set of five traits, openness, conscientiousness, extraversion, agreeableness, and neuroticism. And a difficult person is one who has lower levels of agreeableness compared to others. Such a person might be sufficient in other four factors.

However, an antagonist (as a psychological term) refers to a person who lacks most of the said five traits. The Psychology Dictionary defines it as “The thwarter of another individual, using adversary action.”

Online DPTs sometimes use the two terms interchangeably. But that is wrong. A Complicated or unfriendly character does not necessarily match antagonistic characteristics.

Note: Our test can distinguish the two types of personalities accurately.

The 7 Factors of Being a Difficult Person (by Chelsea E. Sleep)

IDR-DPT and most other online quizzes are based on a recent study by the University of Georgia. The said research classified the characteristics of a difficult person into seven traits. The following table explains each of them separately.

Remember that you do not need to have all the seven factors to be a complicated individual. However, studies show that one with an unfriendly character is more likely to have most said traits.

What if the Test Says You Are a Difficult Person?

A 2017 study proved that people with personality disorders are willing to change for the better despite generic beliefs. According to this research-backed by American Psychological Association, “Individuals with PD traits tolerate but dislike those traits, believe that they are impairing, and are interested in reducing them.”

So, you might already be asking, “How can I avoid being a difficult person?” Here are a couple of tips on how to be friendlier and more open.

Viktor Sander says, “Agreeable people are tolerant and open-minded.” So, instead of evaluating others, ask them questions. Let them explain their intentions and visions.

“Disagreeable people often hold unhelpful assumptions that make them unlikable,” says Sander in his 2021 article. If your Difficult Person Test result was positive, you probably have some of the said suppositions. Saying things like, “Everyone is stupid,” is a red flag. You are better off without such hypotheses if you want to look sociable.

3. Help others with no expectations.

You need to learn to give without necessarily expecting to receive. Unconditional support is key to seem friendly and agreeable. (But make sure not to overdo it and let others abuse your kindness).

The Problem with Most Online DPTs

Block, a famous personality researcher, believes that many online tests are inaccurate due to the Jingle-Jangle problem. Different qualities with the same labels and different labels for the same qualities reduce the accuracy of the questionaries.

When it comes to DPTs, Jingle-Jangle terms such as antagonism, sociopathy, and even psychopathy negatively affect the results. And a Difficult Personality Test must distinguish them.

QuizExpo relies on FFM and Dr. Sleep’s seven factors of character complicacy to deliver accurate results. Our questionary differentiates mental disorders such as psychopathy from PDs and casual human traits.

Things to Know Before Taking the Quiz

Here are a couple of quick reminders:

· Unfriendliness is not a mental disorder.

Take the Difficult Person Test results lightly. Disagreeableness is not a mental health issue. While it might be rooted in such problems, it is not a stand-alone disorder.

· There is no clinical way of spotting difficult people.

Lots of studies have been conducted on the subject lately. However, it is still challenging to diagnose one with personality complicacy issues clinically. Still, talking to a therapist or psychologist is your best bet to find out if you are an unfriendly individual. Taking an online DPT is another option in case you do not want to consult a professional.

· The results are not an excuse for being a toxic individual.

You should not use the “difficult person” label to get away with toxicity. Some traits such as manipulativeness, aggressiveness, and risk-taking might also hurt others’ mental and physical health. So, you should be responsible for your actions and avoid irritating or abusing people around you.

QuizExpo is not related to any of the organizations mentioned in the DPT.