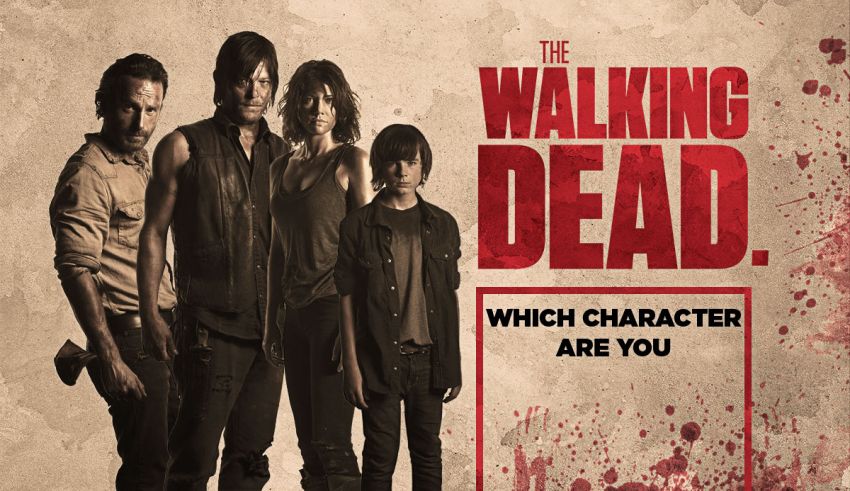 Are you a DEADicated wanting to know which Walking Dead character you are? This personality quiz reveals if you are Rick, Carl, Daryl, Judith, Michonne, or else.

A Personality Test to Find Your TWD Match!

TWD has been around since 2010. And with its final season right around the corner, fans want to know which character is similar to them—before the series ends. This quiz is a set of 20 questions that exposes your true self and matches it to one of the show’s main characters.

It’s different from the Walking Dead Trivia Quiz in that it has no right or wrong answers. The goal is to analyze your personality, not test your fandom knowledge.

Participants get the following pieces of information in their results.

Discover which character is similar to you.

Are you a Grimes family member? Or is your persona more like that of the TWD bad guys? The premise of the test here is to find you a perfect match out of all the Walking Dead characters. Our editors created a database of the top-ranked personalities to compare them to your data, making the results ridiculously accurate.

Get a free personality breakdown.

The TWD Character Quiz explains why you match a particular person. Let’s say you are similar to Rick himself. But why? That’s the type of question the results can answer. We reveal some exciting details about your persona that you probably haven’t noticed yet.

The good thing is that you can share them with your friends to see if they agree or disagree.

Learn your chances of survival.

You know how it is in the TWD universe. Walkers are everywhere, and you need to learn how to survive. But what if you were an actual character living in that very same hazardous world? That’s what we’re curious about, too. The test results expose your chances of outliving the outbreak according to your persona, decisions, and brutality level.

How to Know Which Walking Dead Character You Are?

The most convenient way to learn which character you are is by taking an online test. But not every Walker Stalker would have the time to do so. An alternative method is to read the character description of the main people of the show, deciding which one you represent in real life.

Honestly, this method is both inaccurate and time-consuming. So, we still recommend taking the actual test instead of going manual.

He is a confident, intelligent, and calm man. Rick is not afraid of being in charge, no matter the challenge. People who take the Walking Dead Character Quiz and match him are responsible and trustworthy. Rick always relies on his inner moral compass to map his way out of trouble. But he might be too hard on himself at times. s

Being one of the memorable characters, Glenn is a loyal friend. He does not hesitate to risk his life for his loved ones. And he devotes all he has to making life better for others. People who match Glenn in the TWD quiz are street smarts who’re extremely brave and risk-taking as well.

When it comes to physical and mental strength, Daryl always tops the list. He might seem cold and distant on the outside. But he is compassionate and even emotional inside. As seen in all the seasons, he never fails his friends and family, doing his best to protect them at any cost. Participants who are similar to Daryl are helpful loners—they are always there when you need them. Other times, they’re just hanging out in their emotional and mental cave.

Carl is described as a kind boy who wants to be righteous. We see him develop into a much bolder character throughout the show. And he becomes a reliable young leader like his dad, Rick. Those who match Carl in the Walking Dead Character Quiz are ambitious individuals who value others’ opinions too much. But they’re also brilliant and fast-thinking.

The descriptions you just read are of five personalities only.

Do you need us to remind you that 1,500+ named characters have died in TWD? Such a mind-blowing fact only emphasizes how vast the cast of the show is. And it makes it even more challenging to find your perfect match—because there are so many options to pick from.

Other Ways to Find Your Waking Dead Counterpart

One of the fun methods is matching personality types. You should know your own type in advance, though.

The following table shows the persona category of some of the popular TWD characters. One who shares the same type as you is probably the most similar person to you as well.

Is It Confusing? Let the TWD Character Quiz Decide

It’s never easy to decide who’s similar to you. SO, if that’s the case, let the questionary judge you and your traits to reveal your matching Walking Dead character. It’s both fun and informative. You get to see how you’d react to different situations if you were an actual apocalypse survivor. Plus, you get a free analysis explaining what type of person you are based on your responses.

QuizExpo does not own any of the images used in the ’Walking Dead Character Quiz.’ AMC owns all the said pictures.