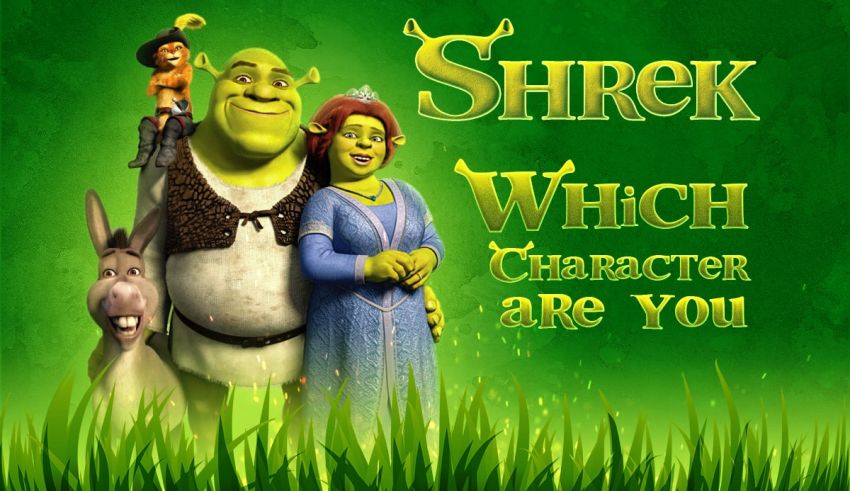 Which Shrek character best fits you? Take this fun quiz and find out! See if you are the lovable green ogre, Fiona, Donkey, or another beloved character.

When we are talking about the animation industry, there are a lot of great names that you can think of. A lot of animated movies made our childhood and many memories, and they are still good pieces of art to this day.

One of these animations is, without a doubt, the story of the lovely green ogre called Shrek. A story about a giant ogre that lives in the forest by the piggy’s mud and loves his life until his times come up to go on a mission to save the princess of his story that is called Fiona.

You know the rest; what are you doing with your life if you didn’t watch Shrek? Let’s talk about it then.

Creation of the Shrek

You may not know this, but Shrek is based on a book by the same name written by William Steig. In 1991, Steven Spielberg purchased the right to Steig’s book and wanted to produce a cartoon based on this story.

But the writer of the book saw the work of DreamWorks studios and wanted to invest in them to create a new world based on this book, and as all, we know right now, he had the right mind about it.

Although they wanted the create the animation in the 90s, the work got done in 2001, and Shrek finally premiered, and it became the 4th most-grossing movie of that year, which was an excellent record for animation at that time.

In those years, there weren’t many high-quality animations like nowadays, and this animation got high praise for its outstanding visuals and incredible, unique, and heart-warming story and narrative.

Tale of the green ogre got so much success for DreamWorks, and they immediately became a strong rival for big companies like Pixar and Disney. DreamWorks began to work on more Shrek movies, and sequels were a huge hit.

The franchise’s 2nd, 3rd, and 4th installments came out next, and they were all praised because they were considered a solid sequel to the Shrek animation. Also, there were other projects and spin-offs related to Shrek, like Puss in Boots.

Main Characters and Their Personalities

We can confirm that the main reason for Shrek’s success is because of their characters. The main characters of Shrek are Shrek, Donkey, and Fiona, which is a great combination. Imagine an ogre, a donkey, and a princess begin their journey; it’s unique, and you have to give credit to the writers.

Shrek’s character is an ogre who loves to swim in the mud and prefers his solitary life. He has a house and loves to eat a lot of food, especially meat. He finds the Donkey on a fair and saves him. Mike Myers was the voice actor of the green ogre and did an incredible job as the green ogre, but Eddie Murphy as the donkey spiced up the whole animation. He got praised for the role of Donkey, and he was absolutely the favorite character of the show.

Fiona is a princess living in a dangerous castle, and someone has to save him from the court so a prince can marry her after saving her. But the prince of this story is Lord Farquaad, a hobbit who threatens the green ogre to get the princess and bring her for him to wed her. Although Fiona didn’t get the highest praise, just like Eddie Murphy, it’s safe to say that Cameron Diaz did an incredible job as Fiona. This character helped her voice acting career to kick off amazingly.

Along the way, the green ogre and Donkey become good buddies. The donkey has a great sense of humor, but his spirit can be a little annoying for Shrek. When Donkey gets saved by Shrek, he feels he owes the green ogre his life and sticks with him.

These characters have unique personalities; check out them in this table:

So, which Shrek character are you?

You know too much about Shrek. Answer 20 questions, and you’re going to find out. Check our other quizzes, like the Encanto character quiz.

Are you ready for the Shrek quiz? Good luck and have fun.