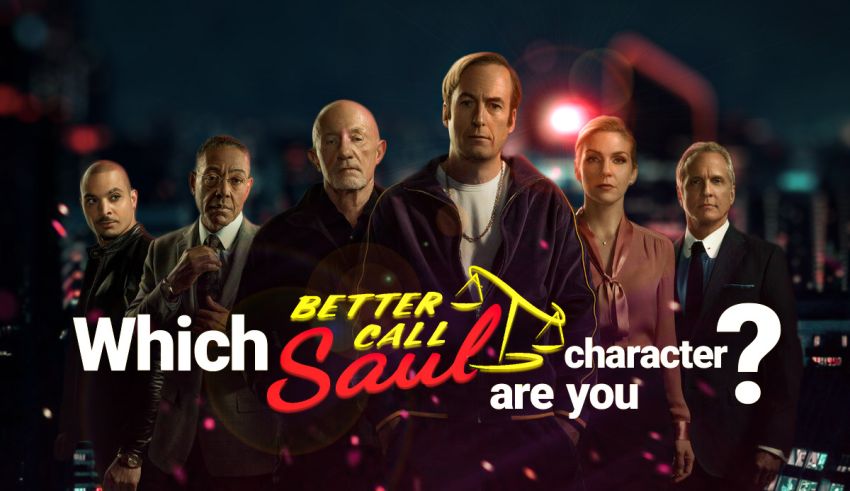 Aren’t you curious to know which Better Call Saul character you are? This personality quiz reveals whether you are Jimmy, Kim, Mike, Gustavo, Howard, etc.

It’s a questionnaire inspired by the AMC’s Better Call Saul’s events to match your character to one of the show’s protagonists or antagonists.

Similar to other viral quizzes like the Euphoria character quiz, it also includes a persona analysis, explaining why you matched a particular personality.

The beloved Breaking Bad spin-off has introduced so many memorable characters. And it’s not easy for fans to figure out which one they represent in real life. But that shouldn’t be a concern anymore as the Better Call Saul quiz handles it.

Answering twenty simple questions on this page could reveal which BCS character you are. We’ve created detailed profiles of all the main cast and will compare them to yours to generate reliable results.

It’s not solely about which Better Call Saul character you are—it’s also about who you really are. The quiz contains a low-key personality analyzer like a mini-MBTI or Enneagram test. So, it can identify your personality type as well.

The thing about Better Call Saul is that its characters are grey. You cannot find a generic, heroic, and all-virtuous person in the plot. That made us think how YOUR dark core could be compared to Vince Gilligan’s fictional people. Are you a super-evil-ish person or just an occasional baddie? We’ll find out.

Unfortunately, Better Call Saul comes to an end with its 6th and final season. But two of the most treasured characters from Breaking Bad, Mr. White, and Jesse, hop on the show to make the ending glorious. And that encouraged us to add a plot twist to our personality quiz.

What if you could match Breaking Bad characters, too? You read it right. Our Better Call Saul Quiz might match your character to Heisenberg or Pinkman.

How to Know Which Better Caul Saul Character You Are

Some folks don’t like tests, which is fine. But here’s what to do if you’re one of them and still want to find your “Saul mate.” Read the personality breakdown of each character and see which one you relate to the most.

It’s not a precise method. But you pretty much don’t have any other options.

Personality-wise, Jimmy or Saul Goodman is not an average protagonist. He’s intelligent, cunning, manipulative, and a total conman. Throughout the show, he also reveals his caring and loveable sides that separate him from other cruel criminals of Albuquerque.

Most fans would still pick Jimmy despite his mischievous nature when asked, “Which Better Call Saul character you are?”

You could describe him as calm, patient, and formidable. But there’s something special about Mike’s personality: He’s actually kind and caring inside. Although a deadly assassin, Mike does everything in his power to protect his family and friends.

A loyal wife, a clever lawyer, and a fearless woman. Kim’s personality is a manifestation of independence and growth. She’s also a natural negotiator, using her communication skills to save both her husband and clients’ butts when things go wrong.

Not many people would pick Howard if a poll asked fans, “Which Better Call Saul character you are?” He is an arrogant, strict, and cruel boss with no mercy for his employees. Although a professional, successful lawyer, Howard is an unpopular personality in the show.

Since his Breaking Bad debut, Gustavo’s paradoxical personality has gained fans’ love. He’s the definition of being a two-faced person as he runs a drug cartel in the shadows while living a normal life as a role model citizen. Personality-wise, Gustavo is a sociopath who is also quite picky and cautious.

The show has over 50 characters—eight of them forming the main cast. So, it could get quite confusing for you to decide which Better Call Saul persona you have. If you’re overwhelmed by that number, just take the quiz and let us do the hard work. It’s our job to find your perfect match, and we do that with unbelievable accuracy.

Ready to Lawyer Up? Because You’re Going to Need One

“What’s the difference between a tick and a lawyer? The tick falls off when you’re dead!” said the infamous Jimmy McGill. But what about you? Are you the tick or the lawyer? Based on your traits, decisions, and even appearance, let’s find out what type of Better Call Saul character you are.

Unlike most other stupid personality quizzes that hit you with, “What’s your favorite color?” we ask you real-deal questions. As a BCS or Breaking Bad fan, we ensure that you will enjoy and relate to every question—because we’re fans of the show, too.

Give it a try. You won’t regret it.

QuizExpo does not own any of the images used in the ‘Which Better Call Saul Character You Are Quiz.’ AMC owns the rights to all the said pictures, and no copyright infringement is intended.