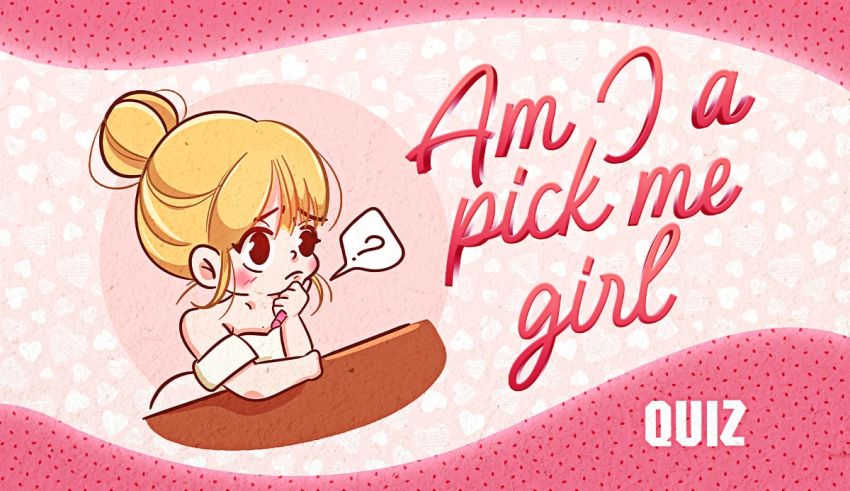 This quiz will help you recognize if you‘re a Pick-Me Girl and how to take back control of your life. Just answer 20 simple questions to find out.

Who is a pick-me girl

You have seen this kind of person before, or you may be this person yourself. Some gals act differently than others, but they constantly point out this matter. Here is the definition of a Pick-Me girl.

Have you seen a girl who looks down on another gal and says she is different from other gals or, to be more precise, “I’m not like OTHER girls”? This person is called a pick-me girl. The people who say that other people act to gain men’s approval but themselves do this matter in a more non-obvious way.

Although being a pick-me girl is not the worst thing in the world, many doctors have declared this term a syndrome, which happens to girls who hate being rejected and don’t want to get hurt by men.

That’s why they want to stand above other people, and they don’t care if they look condescending to other gals and make people feel wrong about how they act. They want to feel superior in some ways to other ordinary people.

Is it wrong to be?

We know why you are here. It could have different reasons; you may hear from someone that you are a pick-me girl or scroll through social media and listen to this. So you want to know whether you are like a PMG. Let’s talk about this matter.

To be honest, it’s not wrong to be a PMG. After all, they choose to be this way and think they can be better if they act like this. However, you must realize that not all people are PMG because they serve differently.

PMG point out what they think is wrong with other people, but different people just act differently and don’t look down on other gals. The always attention-seeking of pick-me girls it’s what makes them who they are.

How to confront them?

Being a pick-me gal is a syndrome. These people often seem insecure about who they are and want to use the benefit of being different from ordinary gals to seek attention from the opposite sex.

If you feel annoyed by these people so much, the best thing you can do is get away from them. But if you like the person, you can make clear to them that they don’t have to point out other people’s problems and behaviors just to feel selected.

These people have to know that they matter as a people and they can be lovely without trying so hard for it. However, it’s sometimes hard to argue with a pick-me gal because they’ll dodge any accusation you put in their way.

Sometimes these people even get selected by a male as a partner, and they end up being the perfect girlfriend for them.

Let’s be honest, Are you a pick-me girl?

Enough of the talking; it’s time to answer 20 questions to answer the million-dollar question: are you a pick-me girl or not? Are you ready? Alright, good luck with the quiz, and have fun.

Brenda is a certified life coach who tries to help couples improve their relationship by creating content and quizzes about love principles. She always reads about psychology and relationship dynamics. She has created more than 20 viral love quizzes for QuizExpo since 2019. Based on the user's feedback, most of her tests could help couples to improve their relationship. Brenda likes to explore new places and cultures. She is a big fan of yoga and meditation and regularly practices both to keep her mind and body in harmony.